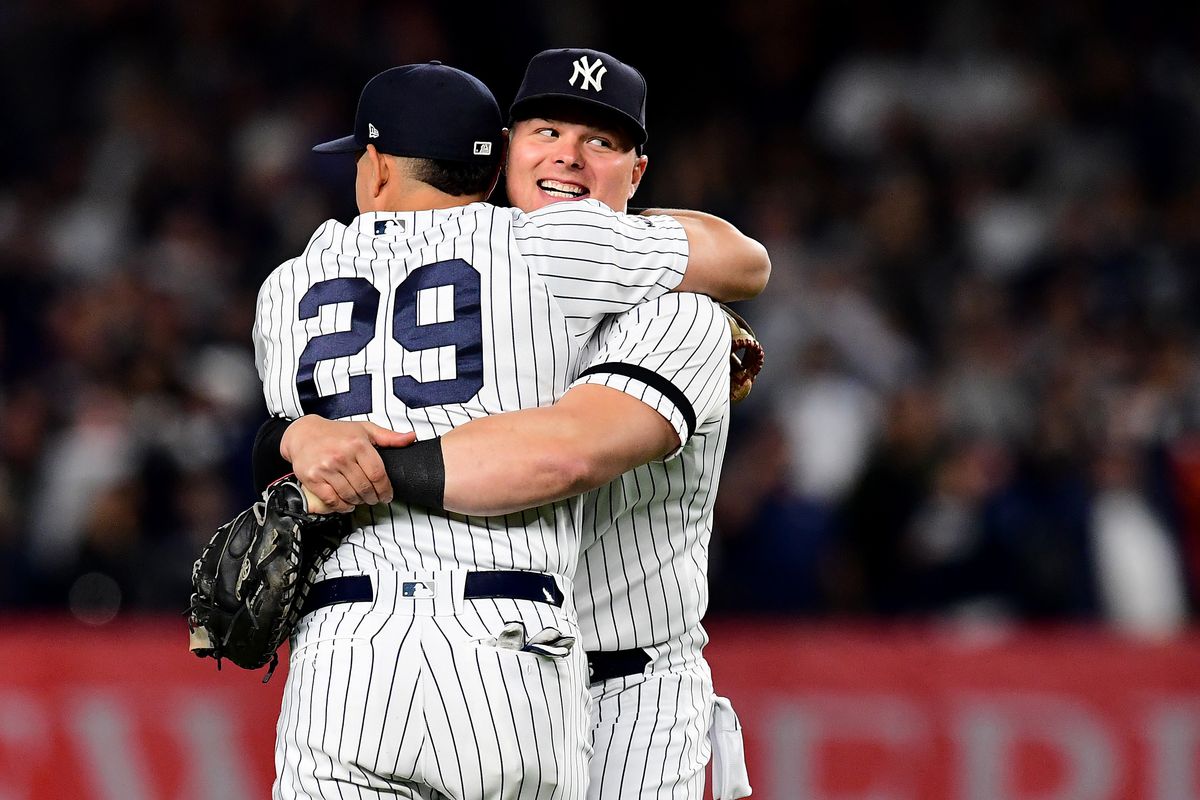 A day after wasting a chance to clinch first place, the homer-happy Yankees went ahead when LeMahieu hit a three-run drive in the second inning and breezed to their 100th win.

Gardner, among just two holdovers from their most recent World Series championship team in 2009, added a solo shot in the fourth and then hit a two-run double in the sixth. Cameron Maybin and Clint Frazier homered for good measure in the eighth, and Aroldis Chapman struck out Albert Pujols to end it as fans’ cellphones flashed to record the moment.

Players lined up for handshakes and hugs, more exuberantly than usual, but there was no wild celebration on the field.

“We got a lot bigger fish to fry, but this is the first step along the way,” manager Aaron Boone said. “Nothing has got in their way. Whatever has come adversity-wise, they faced it and powered right through it.”

Despite putting 30 players on the injured list this season, New York (100-54) wrapped up first place with eight games to spare and made Aaron Boone the first manager to win 100 games in each of his first two major league seasons.

The Yankees open the playoffs on Oct. 4, likely against Minnesota, which leads the AL Central, or the wild-card winner.

Masahiro Tanaka (11-8), in line to start the opener, allowed Kole Calhoun‘s homer leading off the fourth. The Angels had just four hits in seven innings off Tanaka, who struck out six and walked one.

The win came hours after Domingo German, their top-winning pitcher at 18-4, was placed on administrative leave under Major League Baseball’s domestic violence policy. His status for the postseason is uncertain.

New York’s 19th AL East title was its first following a run of 13 in 17 years that started in Derek Jeter’s rookie season. The Yankees, led by young stars Aaron Judge, Gary Sanchez and Gleyber Torres, will be making their 21st postseason appearance in 25 years and 55th overall — 22 more than any other team.

And they will head to the October following their 21st 100-win season, their first in back-to-back years since 2002-04.

New York moved into sole possession of the lead for good on June 15 with the start of an eight-game winning streak, beginning a spurt of 13 victories in 14 games that ended the month. The Yankees led by 6½ games at the All-Star Game, won seven of their first nine after the break and have led by seven to 11½ games since. And they achieved their success despite so many players landing on the injured list, the most in the major leagues since at least 2004.

“Everybody’s done a great job of stepping up when they’re needed,” Gardner said.

After Wednesday’s 3-2 loss, the Yankees waited in their clubhouse for three hours until just before 1 a.m., hoping second-place Tampa Bay would lose at Los Angeles and ensure the division title for New York. But the Rays rallied in the ninth and defeated the Dodgers in 11 innings.

“It was probably actually a good little team building, bonding, one of those times you enjoy being together,” Boone said,

Protective plastic remained overnight wrapping the six large-screen televisions in the Yankees’ clubhouse, a sign that the bubbly and beer celebration was not too far off. Moments after the final out, the spraying started.

A few minutes later, many players headed back to the field for team pictures.

LeMahieu’s homer, which followed a rare infield hit by slow-legged catcher Austin Romine with two outs, landed about three rows over the scoreboard in right-center, giving him career bests of 25 homers and 97 RBIs in his first season with the Yankees. Gardner also set career highs for homers (26) and RBIs (69), and New York extended its team record with 292 long balls.

LeMahieu was the fourth Yankee to reach the 25-homer mark this season, joining Gardner, Gleyber Torres (38) and Gary Sanchez (34). It’s the fifth season in franchise history, and second straight, that at least four players hit 25.

In his second game back from an injury layoff of nearly three months, Giancarlo Stanton was 0-for-3 with a walk and two strikeouts as a designated hitter.

Andrew Heaney (4-6) gave up six runs and five hits in five-plus innings pitched for the Angels.