Why Clippers-Lakers felt bigger than just one game 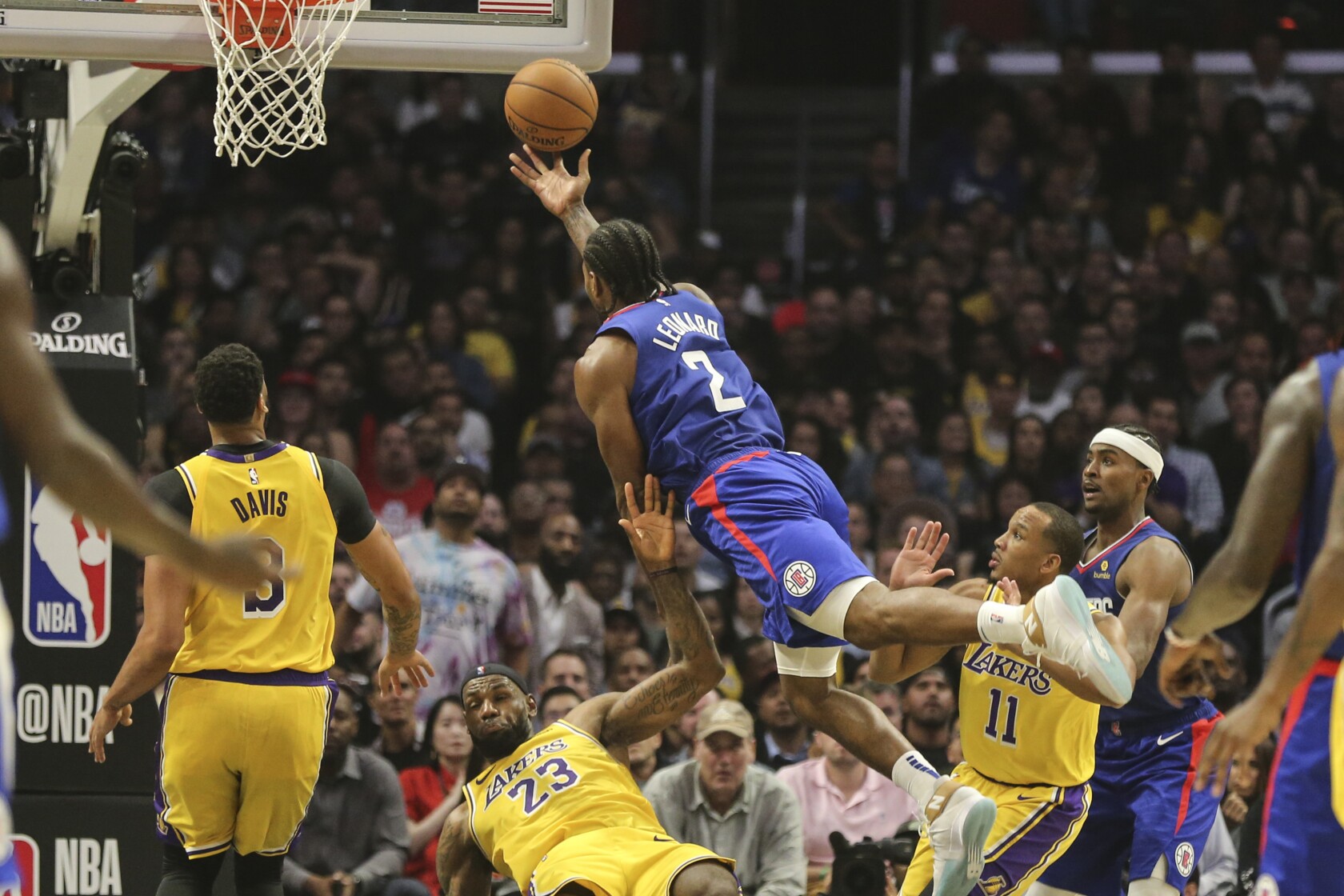 LOS ANGELES — Three months after a heated recruiting battle that pitted Los Angeles’ two NBA teams against one another for the services of Kawhi Leonard, the Clippers and Lakers took the fight to the floor, where talent acquisitions are transformed into stardom. Years of planning, posturing, billboards and flight-tracking finally translated into actual basketball between two teams who play in the same building and each have a claim as title favorites.

Angelenos are notoriously late arrivals, but on Tuesday night, they filled the bowl at Staples Center early, as if they were concerned they might miss something. It was an entirely appropriate response now that four of the best 10 basketball players in the world — LeBron James, Kawhi Leonard, Anthony Davis and Paul George — compete in Los Angeles.

Though the Clippers hosted and won the season opener 112-102, the raucous crowd was a house divided, which has been the case for years at Clippers’ home games against their intracity rivals. The Clippers have spent the past decade mounting the sports world’s most aggressive rebranding campaign, but their introductory video was an unsubtle nod to the long shadow that extends over that effort:

Grit Over Glam, Street Lights Over Spotlights, Squad Over Self, L.A. Our Way.

When after the video Leonard took the microphone to welcome Clippers fans — “We’re going to work hard every night. Let’s get it going” — he was showered with a cacophony of cheers and boos. He was booed during the game with the same spirit Lakers fans roared during their team’s third-quarter flurry with LeBron on the bench. The message to Kawhi from the fans of the incumbent Lakers, who lead the Los Angeles series 102-53: You might have residency in southern California, but universal esteem won’t come without a banner.

Though a tagline like grit over glam is often nothing more than a hollow pitch, the Clippers’ slogan bore a sharp resemblance to the on-court product Tuesday night. Their win over the Lakers was very much an industrial-grade product, powered by Leonard’s brute force in the half-court, a sound effort on the glass and a heavy dose of the lunchpail hustle that defined last season’s overachieving squad.

Doc Rivers sounded the “one of 82” refrain pregame. Nobody on either team nor anyone present in the stands really bought it. Paul George, still a few weeks away from his Clippers’ debut as he recovers from shoulder surgery, might have donned a handsome tuxedo, but Clippers owner Steve Ballmer was so intensely engaged in the game that he ripped a hole in the elbow of his button-down.

Madison Square Garden might be the NBA’s hallowed cathedral, and the Chase Center in San Francisco its glitzy new mall, but Staples Center is undoubtedly the league’s seat of power until further notice.

Kawhi Leonard gets all the way up after grabbing the pass on a backdoor cut and slams it home with his left hand.

Leonard’s debut got off to a shaky start, but it didn’t take him long to make LeBron, AD and the Lakers feel his presence.

Following an 0-for-2, two-turnover opening, Leonard put on a show by making seven straight shots and scoring 15 of his 30 points in a torrid seven-plus minute stretch. The Leonard tear, which came on an array of contested mid-range shots and pull-ups, was a turning point in the game. The Lakers opened confidently with a 13-2 lead. By the time Leonard’s burst was over, the Clippers were up six and it felt like the Lakers were shook. The game may have been tied entering the fourth, but this felt like the Clippers’ game to lose. Only Doc Rivers could slow Leonard down, taking the Finals MVP out in the midst of his hot shooting midway through the second quarter, perhaps an indication of how Rivers will play and sub. Leonard came out around the six-minute mark in the first three quarters.

Entering the season one of the big questions surrounding this matchup was how the Clippers would stop Davis. However, perhaps the question should be what answers the Lakers will have for Kawhi.

The Clippers’ bigs showed up

Montrezl Harrell played more minutes — 38 — than anyone. The Clippers won those minutes by 15. His gravity as a roll man energized the Clippers offense. He unlocked shots for teammates, dished four assists himself, and laid the ball in when the Lakers forgot about him. He completed two and-ones in the fourth quarter against mismatches, the last after a classic Patrick Beverley flying offensive rebound on a free throw.

Everyone wants to see how the Clippers front-court shakes out around Leonard and George. Harrell answered. JaMychal Green attempted seven 3s in 19 minutes, and played tough defense across multiple positions. Maurice Harkless did the same, and helped ice the game with a pokeaway steal from Davis in the post on a switch. The Clippers are going to be very hard to score against with Beverley, George, Leonard, and one of Harkless and Green on the floor with Harrell. Green will see time at backup center. If he and Harkless provide enough offense, the Clippers may be even better than anticipated.

LeBron James chases down Landry Shamet and stuffs him at the rim and immediately draws the offensive foul from Montrezl Harrell.

LeBron James warned reporters no less than three times in the week leading up to opening night that the Lakers, with all their offseason hype and intrigue, were actually only ready for a soft launch.

“We’re not the team that we want to be ultimately (already) tonight,” James said Tuesday morning.

There were moments where the Lakers looked locked in — that 13-2 start! LeBron chasing down Landry Shamet for a block then immediately after taking a charge on Harrell! Danny Green hitting everything! — but there was also a bench that couldn’t keep up with the Clippers and lulls on defense that need to be tightened up. Good thing there are 81 more chances.

Even with George sidelined, the Clippers’ superior depth made the difference. You could argue all four Clippers reserves were better than anyone the Lakers brought off the bench with Kyle Kuzma also sitting out.

All four scored double figures and three (Maurice Harkless, Montrezl Harrell and Lou Williams) finished the game. Given Williams has won back-to-back Sixth Man Awards, with Harrell finishing third in the voting last season, that’s hardly surprising. But on a night where the Lakers were outscored by 20 in Jared Dudley‘s 13 minutes, the depth disparity was certainly notable.

Patrick Beverley makes a nice defensive play against Anthony Davis to earn a jump ball, but jumps too early on the tip.

He scored only two points — on a fairly wide-open layup drive — but, per usual, Beverley proved that he’s the soul of this gritty squad. He bodied up James on the early possessions, surrendering plenty of size but not any hustle. He battled the 6-foot-10 Anthony Davis on a jump ball late in the second quarter — and comically false-started to gain an edge. And late when the Clippers started to pull away, it was Beverley who roared, flexed and beat his chest toward the crowd.

Fittingly, it was Beverley who secured the game’s final rebound. The title-contending Clippers have two new superstars, but Beverley again showed that he remains the club’s fiery beating heart.

Green was red hot in the third quarter, hitting five 3-pointers and creating the kind of space the Lakers will desperately need this year if they’re going to post up as much as they did Tuesday night.

Green hit from all different spots on the floor: the corner from an assist by LeBron. The top of the arc after a two-man action with Dwight Howard. A catch-and-shoot from the other corner. Then from above both elbows on assists from Kentavious Caldwell-Pope and Anthony Davis. Green finished with a team-high 28 points, the most ever by a player making his Lakers debut. His seven 3s were also the most in a player’s first game with a new team since Lou Williams had seven in 2017 with the Houston Rockets.

Last season, it took until March 19 for a Lakers player to make five 3-pointers in a quarter. Green did it on opening night.

The importance of Lou Williams

The Clippers have tons of depth and multiple All-Stars, but boy is Lou Williams a vital player for them. For all their talent, they really don’t have many creators and that magnifies Williams’ value, especially during this time without Paul George.

Williams is way more than a bench player. He’s going to be in the finishing lineup because he can get his own shot and make that shot. On Tuesday, he dropped 21 points on 14 attempts. The Williams-Harrell pick-and-roll is like a warm blanket, it’s so comfortable and reassuring. The Clippers went to it several times in the opener when they needed a basket and plenty of times in between. Williams wants the pressure and that will be a fabulous relief valve for Kawhi and George.