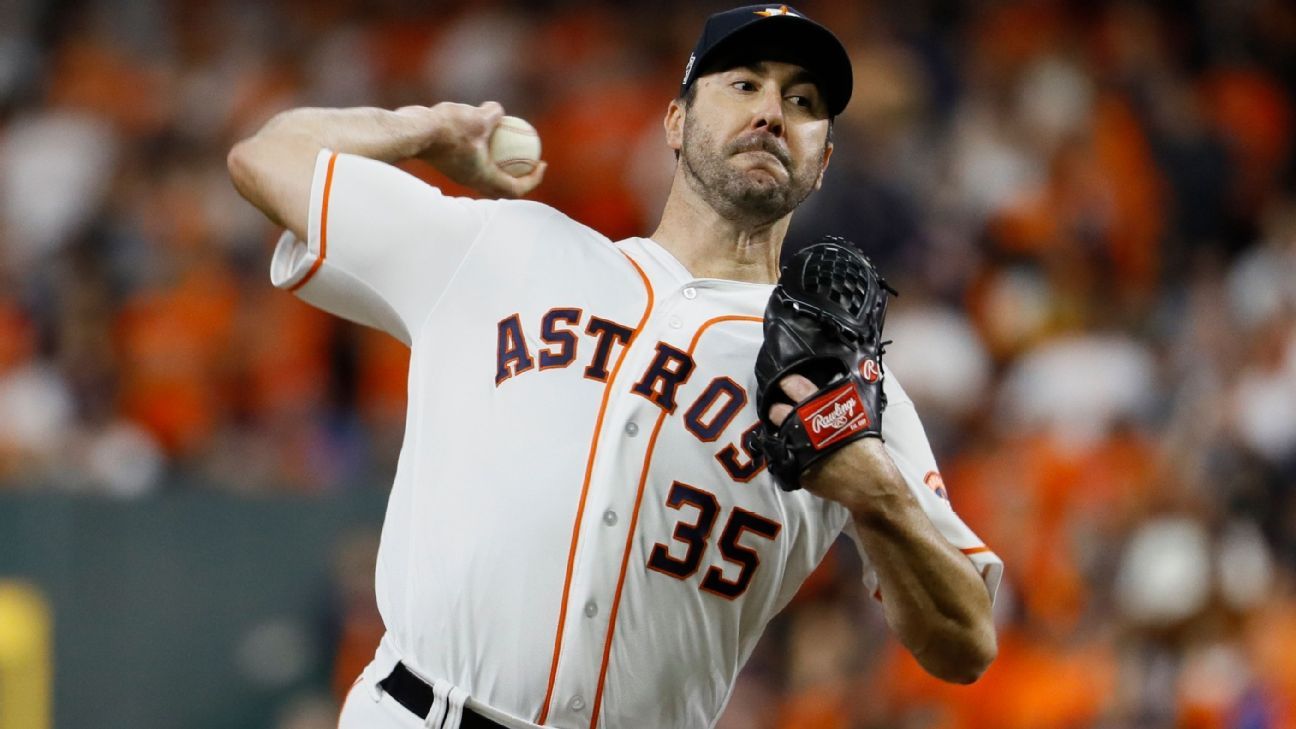 Results are tabulated on a system that rewards seven points for first place, four points for second place, three points for third place, two votes for fourth place and one point for fifth place.

Verlander, 36, became the 20th pitcher to win multiple Cy Young Awards. He won in 2011 with Detroit after a season for which he also took home AL MVP honors. Since then, he’d been a runner-up three times. The eight years between Cy Young wins is the longest span in the history of the award.

“The adversity I went through puts a new perspective on everything,” he said. “I mean, still would’ve liked to have won a couple of them.”

The 300-strikeout season was the first of Verlander’s illustrious career. He struck out his 3,000th career hitter in his final regular-season start against the Angels on Sept. 28, becoming the 18th pitcher to reach that milestone. On Sept. 1, he became the sixth pitcher to throw at least three no-hitters with his 14-strikeout no-no at Toronto.

Verlander and Don Newcombe are the only players to have won Rookie of the Year, a Cy Young Award and MVP.

Verlander teamed with Cole to become the first duo to win 20 games and strike out 300 batters for the same team since Arizona’s Randy Johnson and Curt Schilling in 2002. Verlander is the fourth Astros pitcher to win a Cy Young Award and the second since Houston moved to the American League. Dallas Keuchel took AL honors in 2015, and Roger Clemens (2004) and Mike Scott (1986) won the award when the Astros were in the National League.

With New York’s CC Sabathia retiring, Verlander becomes the active leader in most major pitching categories. His 225 wins are 20 more than that of teammate Zack Greinke, and his 3,006 strikeouts are 314 more than that of Washington’s Max Scherzer. Verlander is also the career leader in innings (2,982), starts (453) and wins above replacement for pitchers (71.4).

The only blotch on Verlander’s 2019 record was the continuation of his long-standing troubles in the World Series. He lost both of his starts against the Washington Nationals, giving up seven runs in 11 innings. Verlander is 0-6 with a 5.68 ERA in seven Fall Classic starts — the most winless starts by a pitcher in Series history.

For all he has done, Verlander might be at it for a while. He reiterated a couple of times this season that he’s still hoping to ply his trade until age 45, which would put him well in line to become baseball’s next 300-game winner.

His goal this offseason is to add velocity to his top-end fastball. He’s thinking about using weighted balls and other new-age throwing techniques.

“I will always try to push the boundaries of what I can do,” Verlander said. “If my body says, ‘Hold on, you can’t do that anymore,’ then I’ll pull back.”

After losing to the White Sox on May 22, Cole began a remarkable streak that lasted all the way to Game 1 of the World Series. He went 25 starts without a loss, including the postseason, going 19-0 in that span, with a 1.59 ERA and 258 strikeouts in 169⅓ innings. Finally, his streak was broken when he lost to the Nationals on Oct. 22.

Cole became a free agent after the season, and based on his age and the strength of his past two campaigns, it is widely believed that he will land the largest pitching contract in baseball history.

“I know that Gerrit had a great time playing here and I know he would like to return, if possible,” Verlander said. “But that is now on Gerrit and his family and people above me.”

Morton, who turned 36 on Tuesday, provided crucial stability for a Rays rotation that was beset by injuries. Morton’s 194⅔ innings was 53 more than that of any other pitcher on the Tampa Bay staff. Among the injured was lefty Blake Snell, who took home AL Cy Young honors in 2018 before being limited to 107 innings in 23 starts this season.

Of course, you don’t become a Cy Young finalist based on innings alone. Morton went 16-6, setting a career mark for wins, and posted personal bests in ERA (3.05) and strikeouts (240). The strong campaign continued a late-career surge for the righty, who had won 10 games just once in his first nine big league seasons. He has won at least 14 games in each of the past three seasons.

Morton teamed with Verlander and Cole in the Astros’ rotation after the latter was acquired in 2018. He left Houston after the season for a two-year, $30 million deal with the Rays.