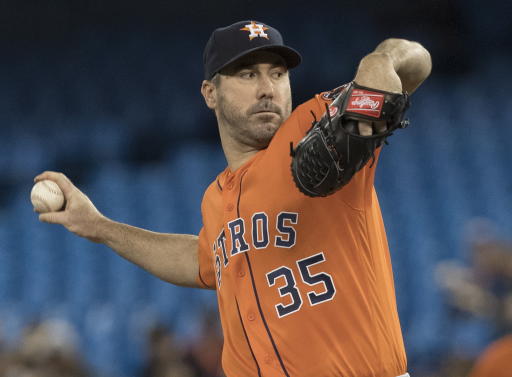 TORONTO (AP) — Justin Verlander pitched his third career no-hitter, punctuating a dominant season with an overpowering performance to lead the Houston Astros past the Toronto Blue Jays 2-0 on Sunday.

Verlander struck out 14 and allowed just one runner, walking Cavan Biggio with one out in the first inning.

Verlander became the first pitcher to throw two no-hitters as a visitor in the same park – he also threw one at Rogers Centre in 2011 with Detroit. His other no-no was in 2007 for the Tigers against Milwaukee.

This was the fourth no-hitter in the majors this year. The last one was a combined effort by Houston’s Aaron Sanchez, Will Harris, Joe Biagini and Chris Devenski (9) against Seattle on Aug. 3.

Oakland’s Mike Fiers and a tandem effort by Taylor Cole and Felix Pena of the Angels accounted for this year’s other gems.

Verlander (17-5) is tied for the big league lead in wins. He tops the majors in strikeouts and innings and leads the AL in ERA.

Rookie Abraham Toro hit a two-out, two-run homer in the ninth inning off Ken Giles (2-3) that cleared the way for Verlander to complete the no-hitter.

Toro made a routine play on Bo Bichette’s grounder for the final out.