appeared as a contestant on Dana White’s Contender Series in 2017, he went in thinking it was his last chance in MMA.

At that time, Perez was more than six years into his pro career. That’s a long time for someone to fight on the regional circuit and never get an invitation to the big show. Especially someone with a good record — Perez was 17-4 when he made his UFC debut. He lives in California and had fought in promotions that have a history of sending talent to the UFC.

Both the men’s and women’s flyweight titles will be on the line at UFC 255 on Saturday night. In the main event, Deiveson Figueiredo will make his first title defense against Alex Perez. Prior to that bout, women’s champ Valentina Shevchenko will take on Jennifer Maia.

Perez, who will challenge Deiveson Figueiredo for the men’s flyweight title in the main event of UFC 255 on Saturday in Las Vegas, had a couple of shots at the UFC before making it there.

He suffered a loss to Adam Antolin in 2015 in the Tachi Palace Fights promotion, after which Antolin got an invitation to appear on “The Ultimate Fighter” reality TV show. Had Perez won that fight, he believes that invitation would have gone to him.

A couple of years later, the “Dana White: Lookin’ for a Fight” series showed up at an event in San Diego where Perez was fighting. He won that night, but he said it was one of the worst performances of his career. White never approached him or offered him a contract.

So when Perez fought Kevin Gray on the Contender Series in 2017, he believed it was probably his last shot at a UFC contract. And if he wasn’t going to be in the UFC, he didn’t think he’d fight for much longer.

Yet he did not put pressure on himself. Before that fight — which Perez won via submission in the opening round — he’d never felt better.

“I remember being in the back, and my corners, you could tell they were pretty nervous,” Perez said. “I was like, ‘Man, I have no idea why they are nervous. I’m confident. I’ve put in the work.’ Don’t get me wrong, there are always nerves before a fight, but it wasn’t like, ‘Oh, my God, I have to do this.’ I was just having fun, and when I’m having fun, I’m at my best.”

The reason Perez believes he was so calm that night — before a fight that would determine the rest of his career — is experience. He’s been fighting professionally since 2011, and before that he wrestled in high school and college. Perez learned a long time ago to worry only about what he can control.

Perez cannot fully control whether he wins a UFC championship on Saturday, but he has done everything he can to put himself in position to do so. Perez is a bit of an unknown going into this title fight, but he shouldn’t be overlooked. It’s taken him a long time to get here, and his presence is well deserved.

84: Percentage of Figueiredo’s career victories (19) in which he got a finish (16). He has had nine knockouts and seven submissions.

5.31: Significant strikes landed per minute in the UFC by Perez, the highest rate among active male flyweights.

8: Knockdowns in the UFC by Figueiredo, the most ever in the men’s flyweight division. He also stands second among 125-pounders with 1.37 knockdowns per 15 minutes inside the Octagon in his career, behind only Perez (1.51).

5:57: Average UFC fight time for Perez, in minutes and seconds. It’s the shortest in men’s flyweight history. Figueiredo is sixth, at 9:44.

2.91: Submissions per 15 minutes in the UFC by Figueiredo, the most all time among male flyweights and second most among active fighters in any weight class, behind only Mackenzie Dern‘s 3.09. Two of his past three fights have ended in submissions. He has attempted 17 submissions in the Octagon, just one fewer than all-time leader Louis Smolka.

Gilbert Melendez breaks down how Alex Perez used his wrestling skills to earn a submission win on his journey to a UFC flyweight title shot vs. Deiveson Figueiredo.

And the winner is … 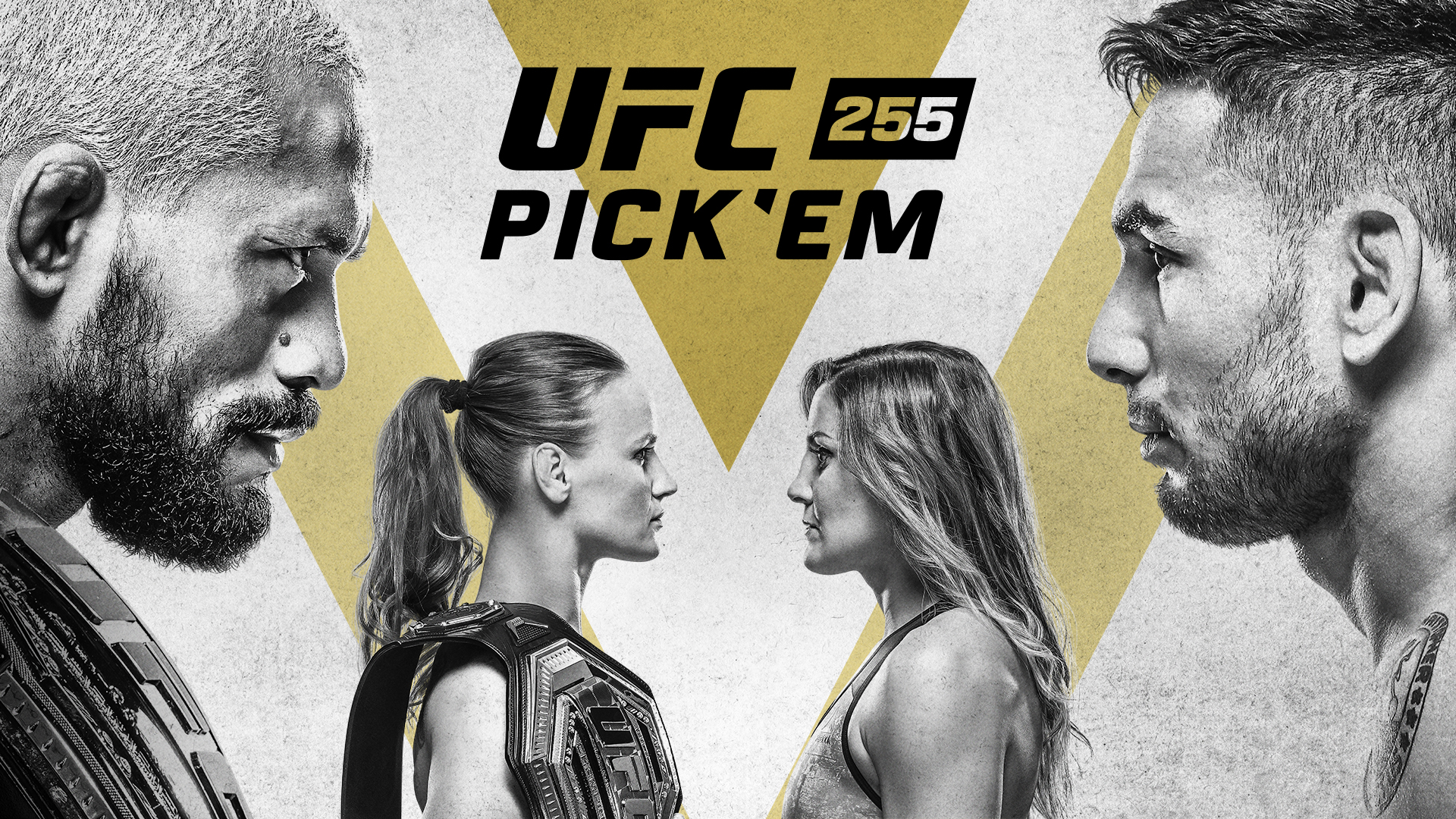 Make your fight picks and compete for a chance to win $5,000! Make Your Picks

When it comes to fight predictions, you’ve gotta go with your gut sometimes, right? No one is debating whether Figueiredo should be favored here. He looked absolutely nasty in back-to-back fights against Joseph Benavidez earlier this year. He’s probably the hardest-hitting guy in the division. He’s physical. He has a terrific ground game to go with his devastating stand-up. He’s the full package. But I think Perez is the full package, too. I think he’s confident, he’s a good wrestler and he has multiple ways to finish. And my gut says he’ll get it done. Perez via submission, fourth round.

Valentina Shevchenko discusses her upcoming fight at UFC 255 and how she feels about being on the same card as her sister Antonina.

0: Sister pairs who have fought on the same UFC card. Valentina and Antonina Shevchenko will be the first, as the champ’s older sister faces Ariane Lipski in a flyweight prelim. Other notable sibling pairs to fight on the same card: Joe and Dan Lauzon (UFC 108), Jim and Dan Miller (UFC 128), Antonio Rodrigo and Antonio Rogerio Nogueira (UFC 140) and Anthony and Sergio Pettis (UFC 229).

Monday through Friday, host Pablo Torre brings you an inside look at the most interesting stories at ESPN, as told by the top reporters and insiders on the planet. Listen

55.4: Percentage of Shevchenko’s significant strike attempts in the UFC that have landed, making her the most accurate striker in women’s flyweight history.

+850: Betting odds on Maia, according to Caesars Sportsbook by William Hill. A Maia win would tie Matt Serra‘s 2007 win over Georges St-Pierre as the second-biggest upset in UFC history, behind only the 2015 KO of Ronda Rousey by +875 underdog Holly Holm.

5-0: Shevchenko’s record at flyweight, giving her the best win percentage (1.000) in division history.

98.9: Percentage of Maia’s significant strikes landed in the UFC that come while her fights are in standing position.

Melendez shows how Shevchenko sets up her knockouts:

Gilbert Melendez explains how Valentina Shevchenko sets traps for her opponents, which lead to opportunities for knockouts.

And the winner is …

Don’t expect to see a fight prediction from me that goes against Shevchenko any time soon. I think she’s already about the closest thing to a perfect fighter that exists in the sport, yet she’s still one of the most driven and hardest working. She and Khabib Nurmagomedov are similar in that way. They’re already considered unbeatable, but they still work harder than anyone to make sure it stays that way. Maia is a good flyweight, but nothing in her skill set or athleticism suggests she’ll topple Shevchenko. Shevchenko via TKO, second round.

How to watch the fights

Watch the prelims on ESPN2 or ESPN+: Download the ESPN App | WatchESPN | TV

Don’t have ESPN+ for the prelims and PPV? Get it here.

Purchased the fight on your phone and want to stream on your TV? Find out how here.

Prelims star: Joaquin Buckley and the kick heard round the world

Joaquin Buckley, who made a big splash last month with his leaping, spinning KO of Impa Kasanganay in just his second UFC fight, is back for an encore performance, facing unbeaten Jordan Wright in Saturday’s prelims. How notable was Buckley’s KO? It was just the fourth knockout in UFC history stemming from a spinning back kick to the head, joining highlight-reel KOs by Renan Barao, Uriah Hall and Magomed Mustafaev.

1. The co-main event is not the only high-level women’s flyweight bout on the card. Katlyn Chookagian, who unsuccessfully challenged Shevchenko for her belt in February, takes on Cynthia Calvillo, a former strawweight who defeated Jessica Eye in her 125-pound debut in June. Chookagian is No. 5 in the ESPN women’s flyweight rankings, and Calvillo is No. 7.

2. Saturday also could produce a men’s flyweight title challenger when Brandon Moreno, No. 3 in the ESPN rankings, meets eighth-ranked Brandon Royval. Moreno has the third-best striking defense percentage among active flyweights, fending off 63.4% of strikes thrown his way. Royval can become the ninth fighter to start a UFC career with three consecutive submission victories. One oddball notable: This is the first time fighters with the same first name have fought one another since John Lineker defeated John Dodson in October 2016.

3. Mike Perry is a -150 betting favorite for his welterweight bout with Tim Means, but three of Perry’s six UFC losses have come when he was favored.

4. The main card opens with a light heavyweight rematch between former champion Mauricio “Shogun” Rua and Paul Craig, who fought to a split-decision draw in November 2019. Both are on three-fight unbeaten streaks.

6. Four fighters will make their UFC debuts during the prelims. In the show opener, 7-0 Louis Cosce and 5-2 Sasha Palatnikov debut against each other. Dustin Stoltzfus makes his debut at middleweight as a +250 underdog when he faces Kyle Daukaus. And Jared Gooden‘s debut is against 12-fight UFC veteran welterweight Alan Jouban.