Titans’ Marcus Mariota on benching: ‘I’ll be better from it’ 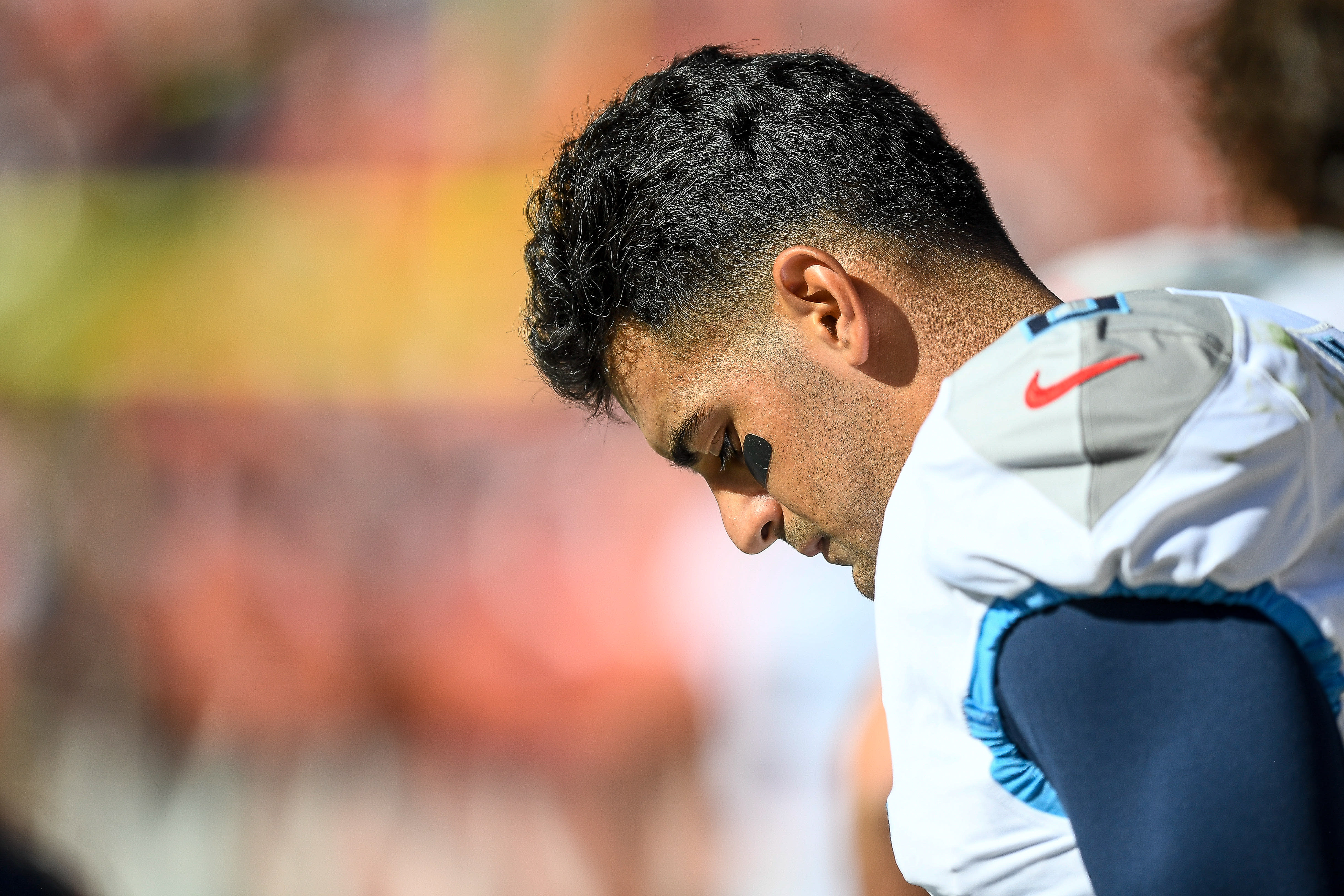 The Tennessee Titans announced on Wednesday that Ryan Tannehill will start the team’s game this Sunday against the Los Angeles Chargers, meaning that Marcus Mariota is benched.

Mariota, the second pick in the 2015 draft, had one of the worst games of his career in Week 6, on the road against the Denver Broncos. He completed just 7-of-18 passes for 63 yards and two interceptions as Tennessee was shutout, 16-0.

‘I’ll be better from it’

In the fashion typical of NFL teams, Tannehill met with media at the podium, while Mariota was in the likely unfamiliar position of chatting in front of his locker stall.

The Titans posted video of his question-and-answer session, which had several keywords, including learn and grow:

“I had an opportunity to play, and I didn’t make the most of it,” Mariota said. “I’m going to learn and grow from it; this is an opportunity for me to grow as a person and a player, and I’m going to do everything I can to help Ryan and help the team out.”

On the possibility that this is only a 1-or-2 week change: “Absolutely. I think you have to be ready at any point in time. So, no matter what I’ll prepare just as I have and I’ll be ready to go.”

Will he look at changing the way he prepares?: “I think it’s an opportunity for me to learn, and I’m going to make the most of it. No matter what, each and every single day, I’m going to approach it with the mindset just to learn. It is what it is, and I’ll be better from it.”

Did he expect to be benched after Sunday’s loss?: “Honestly, I wasn’t sure. I knew the coaches were going to talk about it and they made a decision and for me I’ve just got to be the best teammate I can be.”

On whether the Titans have let him down: “Um, for me, my expectation was always to be the best player that I can be for this team. I, till the day that I die, believe that I gave it all that I’ve got. No matter what, I can learn and grow from this situation. This isn’t going to bring me down, this isn’t going to end my career, this is an opportunity for me to grow, and I’m going to make the most of it.”

His emotions at being benched: “Disappointment. It is going to be different. I haven’t really been in this role for a long time; really at all in my career. Again, I’m going to do everything I can to help Ryan and help this team.”

How much is Mariota to blame?

Mariota obviously showed enough during his career at Oregon that there was talk of him being the No. 1 pick in 2015, though the Tampa Bay Buccaneers ultimately went with Jameis Winston.

The Titans then drafted Mariota, who completed 68.3 percent of his passes in his last season with the Ducks, with 42 touchdowns against just 4 interceptions; for his career at Oregon, Mariota had a sparkling 105:14 touchdown-to-interception mark.

It’s tough to know exactly, and Mariota tried to wave off the question of whether the Titans have let him down, but this is his fifth NFL season, and he’s on his fourth offensive coordinator: Jason Michael was his coordinator as a rookie, then Terry Robiskie for 2016-17; Matt LaFleur, now the Green Bay Packers’ head coach, had the job last year, and Arthur Smith was promoted from tight ends coach to coordinator for this season.

That’s not really a formula for success.