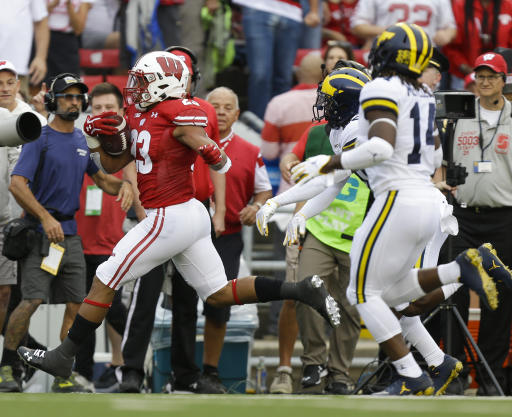 MADISON, Wis. (AP) — Jonathan Taylor ran for 203 yards and two touchdowns, Jack Coan added a career-high two rushing touchdowns and No. 13 Wisconsin made it look easy in a 35-14 victory over No. 11 Michigan on Saturday.

Taylor had 143 yards and both scores in the first quarter, including a 72-yarder. He missed the second quarter due to cramps, but the 2018 Doak Walker Award winner returned in the third to finish with 23 carries to help the Badgers (3-0, 1-0 Big Ten) avenge a 38-13 loss to the Wolverines last season in Ann Arbor, Michigan.

Michigan’s struggles to hold on to the ball continued as the Wolverines suffered another embarrassing loss under coach Jim Harbaugh. Michigan is 1-6 on the road against ranked opponents under Harbaugh, who took over the program in 2015.

The game was so lopsided that the 80,248 in attendance chanted ”overrated, overrated” to a Michigan team expected to contend for the Big Ten championship. Michigan also had to make a quarterback change.

Harbaugh elected to bench Shea Patterson late in the first half in favor of backup quarterback Dylan McCaffrey. Patterson, who fumbled twice in each of Michigan’s first two games, left after completing 4 of 9 passes with 88 yards and an interception.

Patterson returned in the second half after McCaffrey was knocked out of the game on a play that caused Wisconsin safety Reggie Pearson to receive a targeting penalty. Safety Eric Burrell also was ejected following a targeting call.

Patterson finished 14 of 32 for 219 yards with two touchdowns and an interception.

Wisconsin got better production from its quarterback.

Coan, in only his seventh start, had a 1-yard touchdown run and a 25-yarder that made it 28-0 just before the half. Coan also passed for 128 yards.

Wisconsin has outscored South Florida, Central Michigan and now Michigan by a combined score of 145-14.

Zack Baun and Jack Sanborn each had a sack to lead another dominant effort by Wisconsin’s defense. Baun now has a sack in each of Wisconsin’s three games.

Wisconsin inside linebacker Chris Orr and Burrell each recovered a fumble. Burrell and safety John Torchio each had an interception.

Michigan: The Wolverines struggled to get anything going offensively, as the unit continues to sputter under first-year offensive coordinator Josh Gattis. The Wolverines have lost each of their last six road games with Wisconsin.

Wisconsin: After going 8-5 a year ago, the Badgers proved they’re again a force in the Big Ten.

Wisconsin will likely move into the top 10. The Badgers were a 3 1/2-point favorite against the Wolverines and proceeded to dominate the Big Ten preseason favorite.

MAN OF THE PEOPLE

Donovan Peoples-Jones returned for Michigan after missing the previous two games with an undisclosed injury. The junior receiver had a 5-yard touchdown reception late in the fourth quarter.

Michigan linebacker Josh Ross had a boot on his right foot following the loss.

Wisconsin: Takes on Northwestern on Sept. 28 at home.