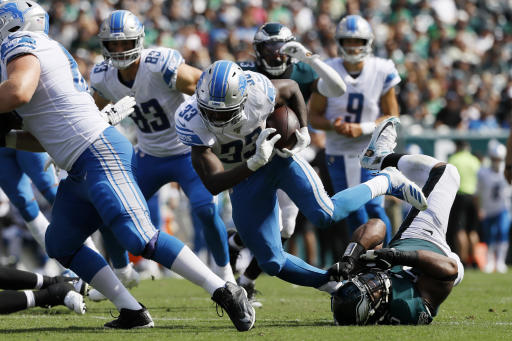 PHILADELPHIA (AP) — Matthew Stafford threw a touchdown pass to Marvin Jones, Jamal Agnew returned a kickoff 100 yards for a score and the Detroit Lions held on for a 27-24 victory over the Philadelphia Eagles on Sunday.

The Eagles had a chance after Malcolm Jenkins blocked Matt Prater‘s 46-yard field goal try with 1:53 left. Rasul Douglas returned it to the Lions 22, but an illegal block on Jenkins pushed it back to midfield.

On fourth-and-5, Darren Sproles caught a pass for a first down but got called for Philadelphia’s third offensive pass interference. Wentz’s deep pass to J.J. Arcega-Whiteside fell incomplete with 41 seconds left.

Jones had six catches for 116 yards, including a 12-yard TD reception that extended Detroit’s lead to 27-17 on the first play of the fourth quarter.

Carson Wentz threw a pair of touchdown passes to Nelson Agholor, but came up yards short on a scramble on fourth-and-8 late in the fourth.

Wentz clearly missed DeSean Jackson and Alshon Jeffery as receivers struggled to get open. Jackson didn’t play because of an abdomen injury and Jeffery has a calf strain.

The Eagles cut it to 27-24 when Wentz threw a 2-yard TD pass to Agholor with 6:59 left. Penalties cost the Lions on that drive. A late hit on Wentz against Trey Flowers extended it and an unnecessary roughness call on Jarrad Davis moved the ball to the 5.

Wentz threw a 20-yard TD pass to Agholor in the third quarter. But the Lions answered with Stafford’s TD to Jones.

Sanders fumbled twice on one drive and Detroit recovered his second one. That led to Prater’s 25-yard field goal and a 17-10 lead.

The Lions recovered another fumble on the ensuing series when Agholor lost the ball after a short catch. Darius Slay returned it 38 yards to the Eagles 22 as Wentz dove to make the tackle. The defense held and Prater kicked a 33-yarder to make it 20-10.

Jordan Howard ran in from the 1 after Wentz scrambled 19 yards on third-and-6, giving the Eagles a 10-7 lead in the first quarter.

The Eagles used a no-huddle approach to get their slow-starting offense going on the opening drive and it resulted in a 25-yard field goal by Jake Elliott.

The Lions answered quickly when Agnew went the distance.

Sanders had his helmet ripped off on a kickoff return when he was clotheslined by Miles Killebrew, who also grabbed the facemask and spun it around. There was no penalty called. The blatant miss was nearly as obvious as the non-call on the pass interference in the Rams-Saints NFC championship game. Todd Prukop was the back judge for both games.

Lions: Host Kansas City next Sunday. The Chiefs won the previous matchup 45-10 on Nov. 1, 2015, but the Lions have won the past two times at home.

Eagles: At Green Bay on Thursday night. The Packers have won five of the past six meetings, including a 53-20 rout at Lambeau Field on Nov. 16, 2014.