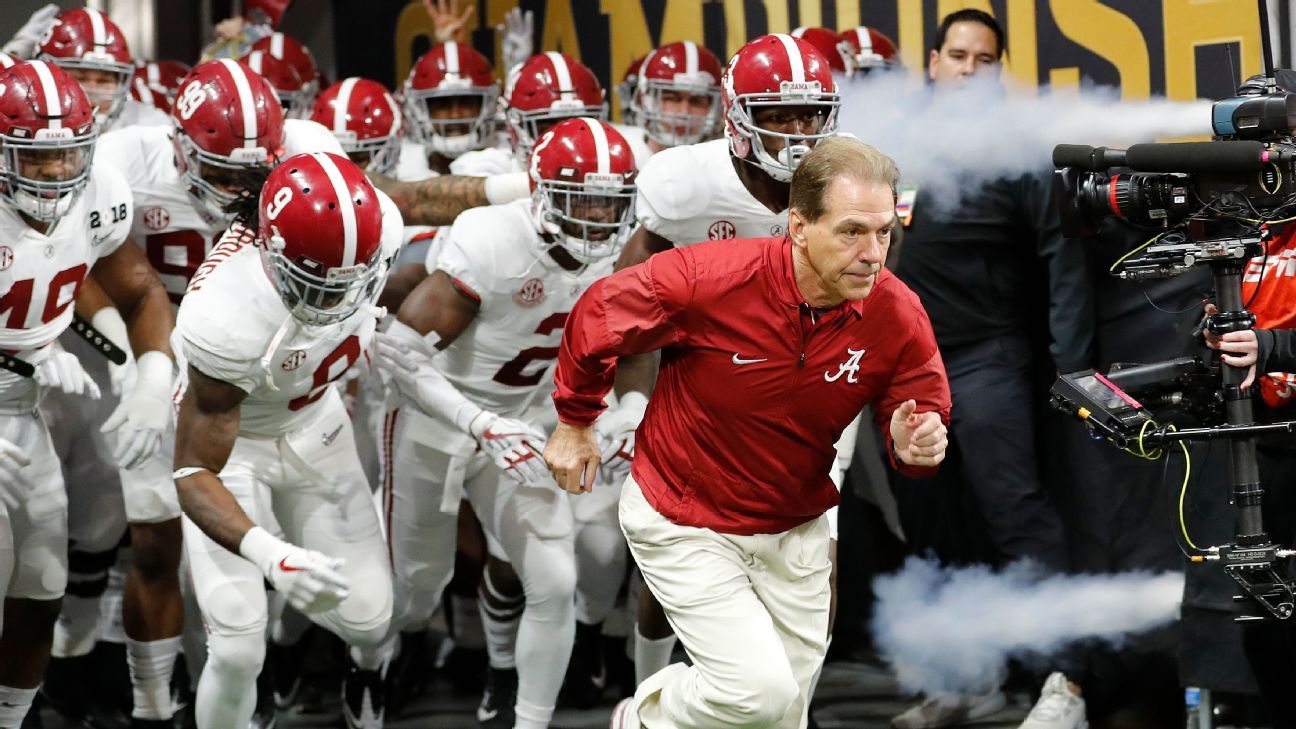 TUSCALOOSA, Ala. — Alabama coach Nick Saban would like to see schools from Power 5 conferences play at least 10 games a year against Power 5 foes and/or Notre Dame in the regular season, and he said his program is working to make that happen on future schedules.

“I’ve always said, ‘Let’s play all Power 5 games,'” Saban told ESPN on Friday. “I was in the NFL where we played all the games against NFL teams. But let’s play at least 10 Power 5 games. It would be better for the players, better for the fans, and I think you wouldn’t have to worry that if you lost a game that you wouldn’t have as much of a chance to still be in [the College Football Playoff]. They talk about strength of schedule now, but how do you really evaluate that?”

“We have to have a good show if we want people to come,” Saban said.

Saban said the model Alabama is discussing would be to play one nonconference Power 5 game annually as part of a home-and-home series and another at a neutral site. That’s as long as the SEC sticks with just eight conference games. The ACC and SEC are the only Power 5 leagues that play eight regular-season conference games, while the Big 12, Big Ten and Pac-12 each play nine.

Saban has previously said he would be in favor of playing nine conference games in the SEC. The SEC athletic directors met earlier this week in Asheville, North Carolina, and Alabama athletic director Greg Byrne told ESPN, “I think there’s a reality that all programs, coaches and ADs are facing that we need to have good games for our team, our fans and our programs. Whether that’s additional conference games or additional [Power 5] nonconference games, I think you’re going to continue to see it move in that direction.”

Alabama leads all Power 5 schools with 17 games the past three years against teams that finished the season ranked in the final Associated Press Top 25 poll. The Crimson Tide are 14-3 in those games, including a 4-2 record in the College Football Playoff.

This season, of Alabama’s four nonconference games, only the neutral-site season opener against Duke is against a Power 5 school. The others are at home against FBS independent New Mexico State, Southern Miss of Conference USA and FCS school Western Carolina.

Over the last decade, Alabama has played primarily neutral-site games against nonconference foes, but Saban said there has been a concerted effort going forward by the Crimson Tide to schedule home-and-home series against marquee opponents. Among those series already scheduled are Texas in 2022-23, Wisconsin in 2024-25, West Virginia in 2026-27, Notre Dame in 2028-29 and Oklahoma in 2032-33.

In addition, Alabama has a 2-for-1 series scheduled with South Florida of the American Athletic Conference. Alabama will play in Tampa in 2023 with USF coming to play at Alabama in 2024 and 2026.

Alabama is also in the process of trying to finalize a neutral-site game with Florida State in Atlanta in 2025. Alabama will open the 2020 season against USC in Arlington, Texas.

“We’re almost all home-and-home games from here on out and trying to get another one,” Saban said. “You’ve got to make them match up because if you’re playing an away home-and-home game and a neutral-site game in the same season, you don’t have enough home games.”

Saban said Alabama was at a little bit of a disadvantage in scheduling because all of its natural rivals were in the SEC — unlike Georgia, which has Georgia Tech; South Carolina, which has Clemson; and Florida, which has Florida State.

“If we don’t, fans are going to quit coming, and I can’t say I blame them.”