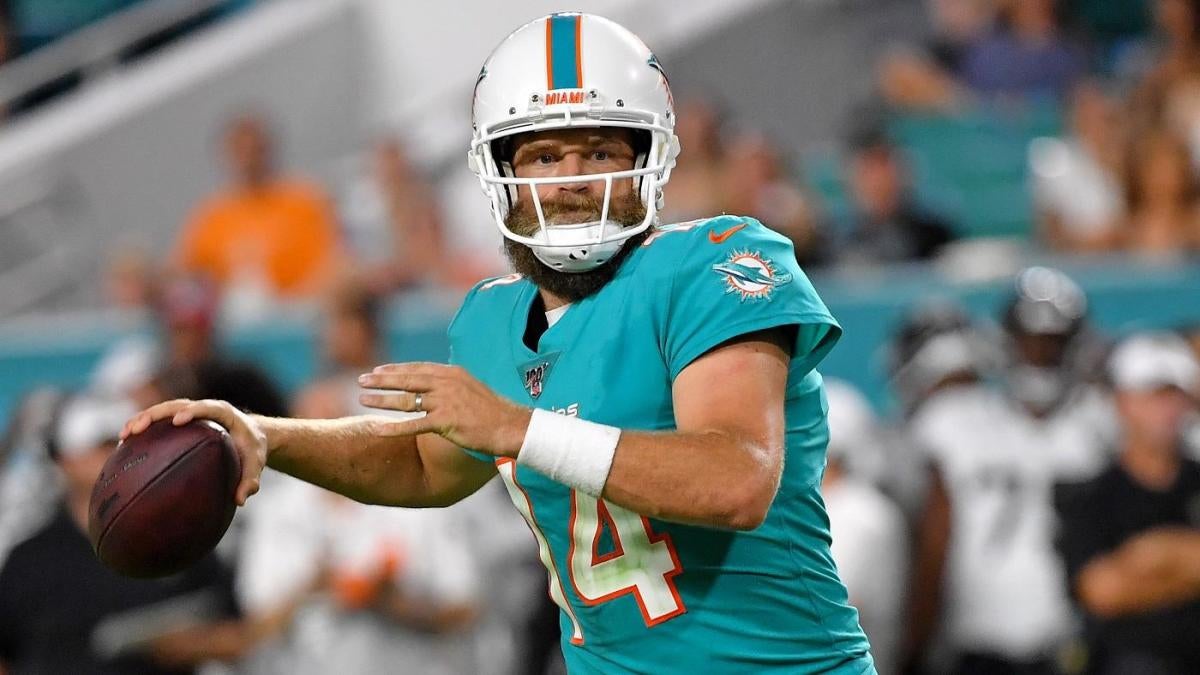 The Miami Dolphins finally have a starting quarterback.

New Dolphins coach Brian Flores announced on Thursday that Ryan Fitzpatrick will be the team’s starter for the Miami’s regular season opener on Sept. 8 against the Baltimore Ravens.

“After a thorough evaluation of OTAs, training camp, games, practice, we felt like this was the best move for this team going into the season,” Flores said during a press conference following the Dolphins 16-13 win over the Saints to wrap up the preseason schedule. “Ryan has done a really good job from a leadership standpoint, from an execution standpoint and we feel like that’s the best thing for this team.”

The Dolphins will be the eighth team that Fitzpatrick has started for in his 14-year career.

Fitzpatrick beat out Josh Rosen in a competition that was so close that it took Flores four preseason games to figure out who he wanted to give the job to. The Dolphins are apparently completely comfortable with Fitzmagic running the offense, because Flores shot down a question asking if Rosen might get a chance to start later in the season.

“Fitz is our starter, you don’t go into one of these saying, ‘He’s going to start this amount of games.’ That’s not how you do this,” Flores said. “I think he’ll do a good job.”

Although the Dolphins didn’t announce the winner of the job until Thursday night, Flores admitted that the decision to start Fitzpatrick had been made at some point over the “past week or so.”

Flores informed both players of the decision this week.

“They both handled it well,” Flores said. “These are two of the most professional guys I’ve been around. Obviously, Fitz was excited, and Josh was disappointed.”

The fact that the Dolphins waited so long to name a winner isn’t that surprising and that’s because neither quarterback did much to win the job during the preseason. In three games, both quarterbacks put up mediocre numbers. Although Rosen threw for more yards (352 to 166), that’s because he saw more action.

The former first round pick played in three games during the preseason and finished 28 of 45 for 352 yards and interception. The one thing Rosen didn’t do though was lead a touchdown drive. Rosen was acquired by the Dolphins just before the 2019 NFL Draft after Miami pulled off a trade with Arizona.

As for Fitzpatrick, he signed a two-year deal with the team in March. Although Fitzpatrick has been solid at times in his career, he’s generally only good in spurts. The 36-year-old got off to a hot start in Tampa Bay last season before fizzling out and losing his job when Jameis Winston returned from an early season suspension. Fitzpatrick finished the preseason this year 17 of 32 for 166 yards with one touchdown pass.

On Rosen’s end, Flores said the 22-year-old got better all through training camp, but just isn’t ready to start a game.

“I’ve said multiple times, I think he’s improved greatly over the course of training camp,” Flores said. “This is a young kid who works extremely hard and it’s important to him. He’s talented, but playing quarterback in this league, it takes some time. He’s in a new offense. I think he’ll get there. When? I don’t know. A lot of that is up to him. He knows that.”

During his rookie year with the Cardinals, Rosen started 13 games and went 3-10.