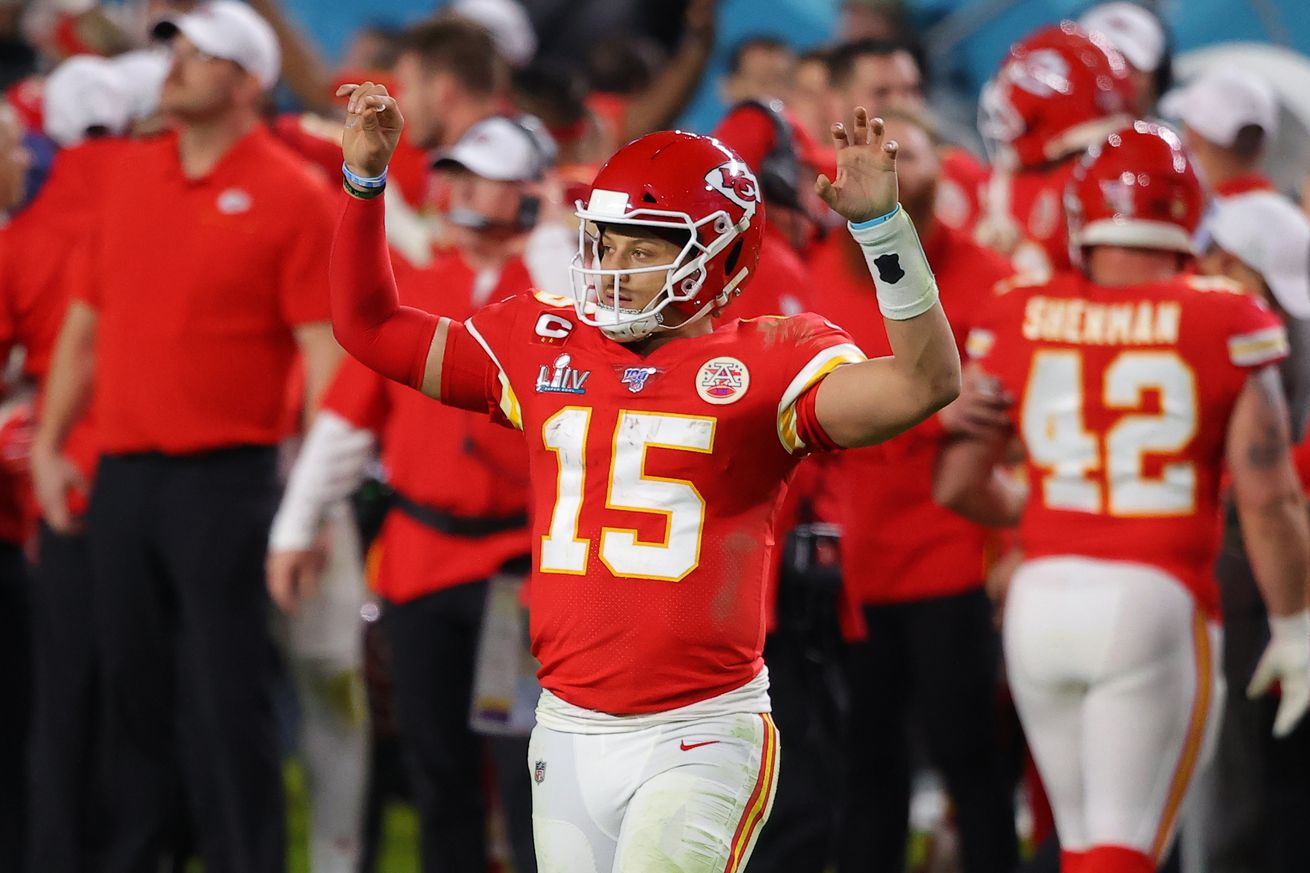 Mahomes shook off an awful start to lead the Chiefs to their first Super Bowl victory in 50 years.

His passes were inaccurate. An increasingly smothering 49ers’ pass rush kept him from buying time in the pocket. His receivers struggled to find space downfield.

The struggles showed in the statline. Near the halfway point of the fourth quarter, Mahomes had completed only 18 of his 29 passes for 172 yards — a 5.9 yard per pass average, well below his career regular-season mark of 8.6 — and thrown zero touchdown passes (but did run for one) with two interceptions.

More importantly, it showed on the scoreboard. With seven minutes left in the biggest game of the season, his Chiefs trailed the Niners, 20-10.

This, somehow, was not a problem for Mahomes. Over the course of nine minutes, he turned the Chiefs from a hard-luck loser to an NFL champion. In the process, he made himself the youngest player to win a regular season MVP and a Super Bowl in league history.

Mahomes shook off a bad, bad start to lead the Chiefs to their first title in 50 years

It shouldn’t have been surprising. Playing from behind is a Mahomes playoff specialty. He’d led Kansas City back from deficits to take a fourth-quarter lead in three of his first four playoff games, winning all but the 2019 AFC title game against the Patriots — when he never had the chance to touch the ball in overtime.

This game felt different, however. Mahomes had been stung in those games by dropped passes and bad penalties. In Super Bowl 54, a torrid San Francisco pass rush baited him into stupid mistakes. He bounced passes to wide-open receivers. He threw into double coverage. He completely blanked a linebacker in coverage, leading to one of the ugliest interceptions of his career.

Through his first six drives, the Chiefs converted only three of their 10 third-down opportunities. They’d converted more than 47 percent of those in the regular season, second-best in the league.

All of this slid off Mahomes’ shoulders like water off a duck’s back. Over his final three drives, he batted 1.000 on third-down conversions, acing a third-and-15 by launching a deep ball to a wide-open Tyreek Hill and turning third-and-10 into first-and-goal thanks to a pass interference penalty in the end zone.

Credit Andy Reid and offensive coordinator Eric Bieniemy for their role here. They trusted a gassing offense to stand tall in a speed-up, no-huddle offense. That aggression forced gaps in the Niners’ otherwise stout coverage downfield. From there, they trusted a stellar receiving corps led by Hill, Travis Kelce, and Sammy Watkins to do their jobs.

All Mahomes had to do was find his guys downfield. Sometimes it worked even when he stared down San Francisco’s top corner:

Sammy Watkins diced up Richard Sherman, then Patrick Mahomes just had to drop a pass in the bucket pic.twitter.com/ezEyARIu26

Over his final three drives before his Chiefs were able to kneel out the clock with an 11-point lead, Mahomes’ numbers flipped to this:

Kansas City scored touchdowns on each of those drives — even if the last one was all thanks to Damien Williams. A 20-10 deficit turned into a 31-20 win and a confetti bath in Miami Gardens. That’s not bad for a guy who started his Super Bowl with two interceptions and a 49.2 passer rating through three-plus quarters.

This win didn’t belong solely to Mahomes, though

Some of that glory lies with the Kansas City defense. It shut down the 49ers when they had two different opportunities to salt this game away in the fourth quarter and a shot to drive for a game-winning touchdown after the Chiefs took a late lead. It also belongs to an offensive line that kept Mahomes upright despite playing tired throughout the second half, but found a reserve gas tank with the game on the line. Hill, Kelce and Watkins all came up huge when their QB needed them most.

The eye of that hurricane was the quarterback behind Kansas City’s return to prominence. Mahomes remembered who he was after three quarters of looking like a stretched-out sketch of Brian Hoyer. And a full-strength Mahomes is an MVP — both in the regular season (2018) and the Super Bowl.

Patrick Mahomes (24 years, 138 days old) is the youngest player to be named NFL MVP and win a #SuperBowl in their career.#ChiefsKingdom | #SBLIV | @PatrickMahomes

There’s a chance Mahomes’ awful start was the result of big game jitters, and now he’s gotten that out of the way. That’s horrible news for whomever has to face the Chiefs in the Super Bowl in the future. And at 24 years old, there’s a very good chance Mahomes will have multiple bites at that apple.

It’s great news for the Chiefs, though. With their Super Bowl MVP in tow, they probably won’t have to wait another 50 years between world championships.