No hard feelings: Elliott laughs at ‘Zeke who?’ shirt 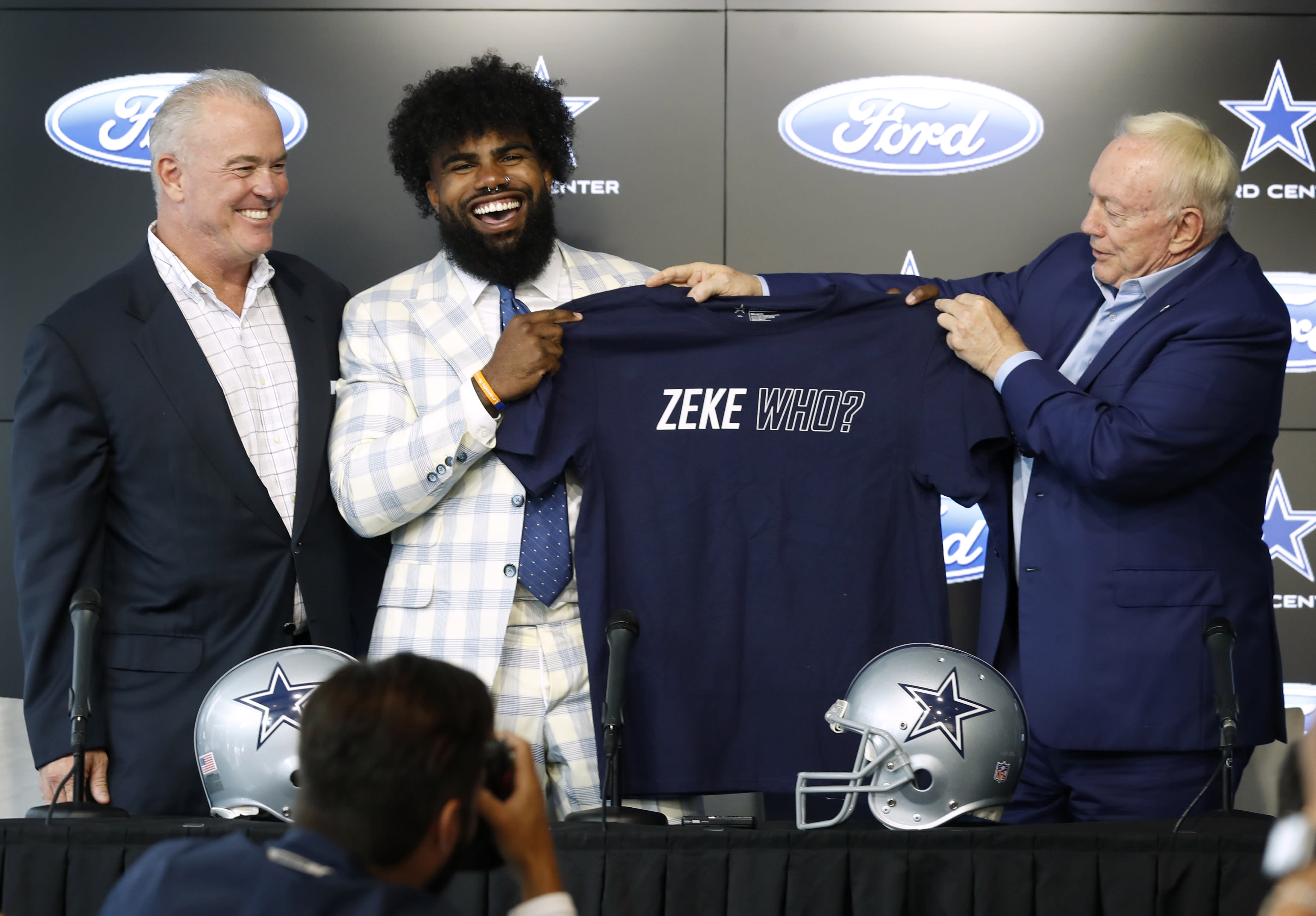 It was all laughs and smiles between Ezekiel Elliott and Jerry Jones over “Zeke who?” on Thursday. (AP)

It was all smiles in Frisco Thursday when the Dallas Cowboys officially announced the signing of former holdout running back Ezekiel Elliott.

After weeks of keeping atop the NFL news cycle before ultimately making Elliott the highest-paid running back in football, there appeared to be zero ill will between Jerry Jones and his star running back during a news conference on Thursday.

The pair were even able to have a laugh at the infamous “Zeke who?” quip Jones made as the tension over the holdout ratcheted up during the preseason.

What does Jones do with a perceived negative that made headlines for weeks? He turns it into a marketing opportunity, of course.

In addition to $50 million in guaranteed money due in his contract extension, Elliott received a new T-shirt from Jones with the phrase “Zeke Who?” emblazoned on the front.

On the back? “That’s who!” complete with an image of Elliott and the iconic Cowboys star.

Another marketing win for Jerry Jones

Here’s guessing those shirts will soon be widely available at your favorite Cowboys merchandise outlet.

Leave it to Jones to turn a source of tension into a marketing opportunity. He may not have the best track record of putting together winning football teams, but he sure knows how to leverage media coverage and make money.

Origins of ‘Zeke who?’

The shirt, of course, is a reference to the comment Jones made after a preseason game against the Los Angeles Rams. When asked about the emergence of backup running back Tony Pollard in terms of contract negotiations with Elliott, Jones responded, “Zeke who?”

Yes, Jerry Jones said “Zeke who”, when asked if Tony Pollard is his “best negotiator”.

But… this is the full “Zeke who?” sound bite from Jerry, complete with the necessary context of his follow-up to the joke, saying the #Cowboys need both Zeke Elliott and Tony Pollard. pic.twitter.com/yDiZnlwwke

Jones’ remark reportedly irked Elliott and prompted his agent Rocky Arceneaux to blast it as “disrespectful.”

That was roughly three weeks ago.

No more talk of disrespect

Now Elliott has his payday and is ready to go for Week 1 against the New York Giants. Which, in hindsight, appears to have been the plan all along. There’s no talk of disrespect in Cowboys camp now.

“That’s so far behind us,” Elliott said when asked about “Zeke who?” after rejoining the Cowboys. “We signed a deal. So there’s really no point in talking about that old stuff.”

Jones, however, is clearly happy to talk about “that old stuff” as long as there’s a dollar to made and he does so with a smile on his face.