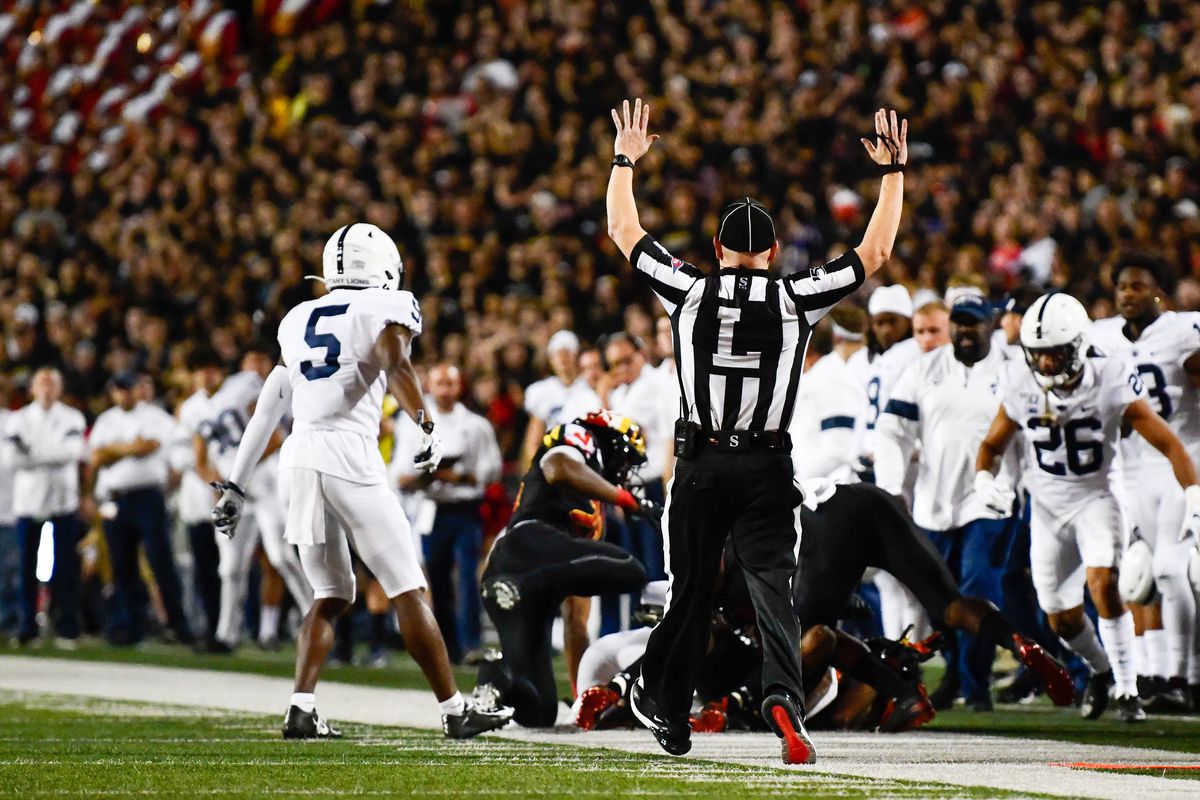 COLLEGE PARK, Md. (AP) — Sean Clifford threw for 398 yards and three touchdowns, ran for a score and carried No. 12 Penn State to yet another lopsided victory over Maryland, a 59-0 blowout Friday night that typified the one-sided nature of this regional series.

Penn State scored on its first four possessions, led 38-0 at halftime and finished with 619 yards in its Big Ten opener. After Jan Johnson got things started by ending Maryland’s first possession with an interception, Clifford cruised into the end zone from the 8 and the rout was on.

After halftime, most of fans remaining from a rare sellout crowd of 53,228 at Maryland were the several thousand cheering for the Nittany Lions (4-0, 1-0).

Because the Terrapins (2-2, 0-1) won their first two games at home by a combined 122 points and Penn State was coming off a tight 17-10 win over Pittsburgh, the Nittany Lions were favored by only a touchdown.

Clifford threw a 58-yard touchdown pass to KJ Hamler for a 14-0 lead, connected with Nick Bowerson a 15-yarder to make it 28-0 and hit Journey Brown for 37 yards for a 35-point cushion.

After making his 14-for-30 performance against Pittsburgh a distant memory, Clifford remained on the sideline with 5:45 left in the third quarter and Penn State up 45-0.

Clifford, a redshirt sophomore, made his fourth start following the departure of standout Trace McSorley (now with the Ravens). Perhaps the only flaw in his 26-for-31 gem was his first career interception compared to 11 TD passes.

Maryland, meanwhile, has regressed terribly after winning its first two games under coach Mike Locksley. The Terrapins were ranked No. 21 after beating then-No. 21 Syracuse on Sept. 7, but an ugly loss at Temple and this embarrassing defeat has left Locksley searching for answers.

Virginia Tech transfer Josh Jackson, who was so impressive during the first two weeks, has since struggled. His second pass of the night was picked off and he finished 10 for 21 for 65 yards and two interceptions.

The Terrapins garnered only 128 yards in offense. Until late in the fourth quarter, Clifford had more yards rushing (54) than the entire Maryland backfield.

Penn State LB Micah Parsons was ejected for targeting after he ran over Jackson in the pocket midway through the first quarter. Maryland DB Deon Jones was called for targeting on a second-quarter tackle of Justin Shorter and ejected.

This blowout could get Penn State into the Top 10. Though Maryland was obviously overrated, Penn State dominated from start to finish on the road in a Big Ten game. That’s not easy to do.

Penn State: The Nittany Lions put together a near-flawless first half and emphatically addressed coach James Franklin’s concern about ”being better on third down” offensively and defensively. Penn State went 7 for 7 on third down before finally coming up short, Maryland failed to covert x of x chances on third down.

Maryland: This looks nothing like the team that throttled Howard and Syracuse in the first two games. This loss, on top of the one at Temple, negates all the optimism generated by the 2-0 start that had Locksley looking like a miracle maker.

Penn State: The Nittany Lions open the home portion of their Big Ten schedule next Saturday against Purdue. Penn State leads the series 14-3-1, including a 62-24 rout in the last meeting in 2016.

Maryland: The Terrapins look to get back over .500 with a trip to Rutgers on Saturday.