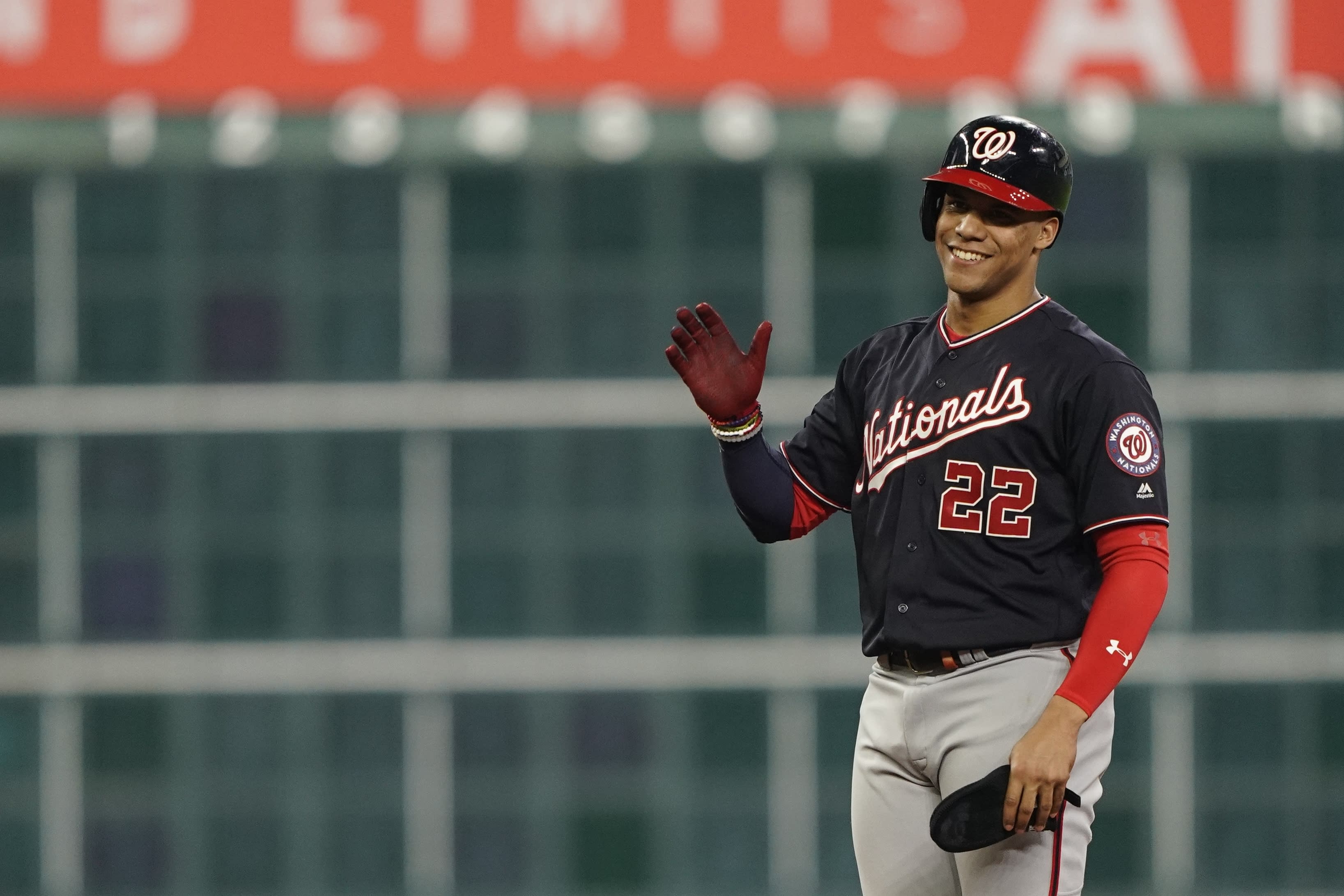 On paper, Game 1 of the World Series was supposed to be a pitching matchup of epic proportions as Washington Nationals ace Max Scherzer battled the Houston Astros’ previously untouchable right-hander Gerrit Cole.

In reality, two of baseball’s most powerful offenses ended up pushing MLB’s pitching titans to the limit in a game filled with clutch hits and thrilling moments.

Behind a memorable three-hit performance from 20-year-old outfielder Juan Soto, it was the Nationals who emerged with a 5-4 victory in Game 1.

Soto homered, doubled, singled and even stole a base, which put him in a category all by himself.

That changed when Ryan Zimmerman and Soto combined to make home-run history for Washington. Zimmerman drove home Washington’s first-ever World Series run with his second inning solo shot. Soto followed with a solo blast in the fourth inning, making himself and Zimmerman the first 20 years or younger and 35 years or older teammates to homer in a World Series game.

The Astros plated two first-inning runs on Yuli Gurriel’s two-out double. It was first hit against Max Scherzer with runners in scoring position with 18 at-bats during the postseason. But the three-time Cy Young award winner settled down, holding Houston scoreless over his final four innings.

Houston scored single runs in the seventh and eighth innings to make thing interesting, but the Nationals Sean Doolitte managed to earned his second four-out save in October.

WHO MADE THE DIFFERENCE

• Juan Soto: What a night for the 20-year-old. Soto has been a driving force for Washington’s offense all season long, so it’s not a complete shock that he was productive in Game 1. When you consider the opposing pitcher though and the environment, it’s a very impressive performance.

• Ryan Zimmerman: When the Nationals needed an answer to Houston’s first-inning rally, Zimmerman instantly stepped up. As the first-ever player drafted by the Nationals in 2005, it’s only fitting this moment belonged to him.

Juan Soto’s at-bats against Gerrit Cole were all must-see.

Cole won the first battle by striking Soto out on three pitches. Then Soto even the score with a home run. That led to the rubber match, which Soto won again with an opposite-field double. This swing is a thing of beauty.

WHAT THEY’LL BE TALKING ABOUT

The Nationals bullpen bent but didn’t completely break in Game 1. Now the concern for Washington is how much bending will take before the break occurs. Manager Dave Martinez was able to steal three outs by using Patrick Corbin for an inning of relief, but with Daniel Hudson and Sean Doolittle being the only two relievers he believes in it’s going to an uphill battle to get 27 outs enough times to win a seven-game series.

The World Series continues with Game 2 on Wednesday night. First pitch in Houston is scheduled for 8:07 p.m. ET.

The Nationals will look to make it two straight wins with Stephen Strasburg on the hill. The 31-year-old right-hander has been a beast during the postseason, limiting opponents to four earned runs and over 22 innings while striking out 33 batters. The Astros will counter with Justin Verlander. The AL Cy Young candidate has had two very rough first innings in October but has otherwise been solid, allowing three total runs over his other 22.1 innings.