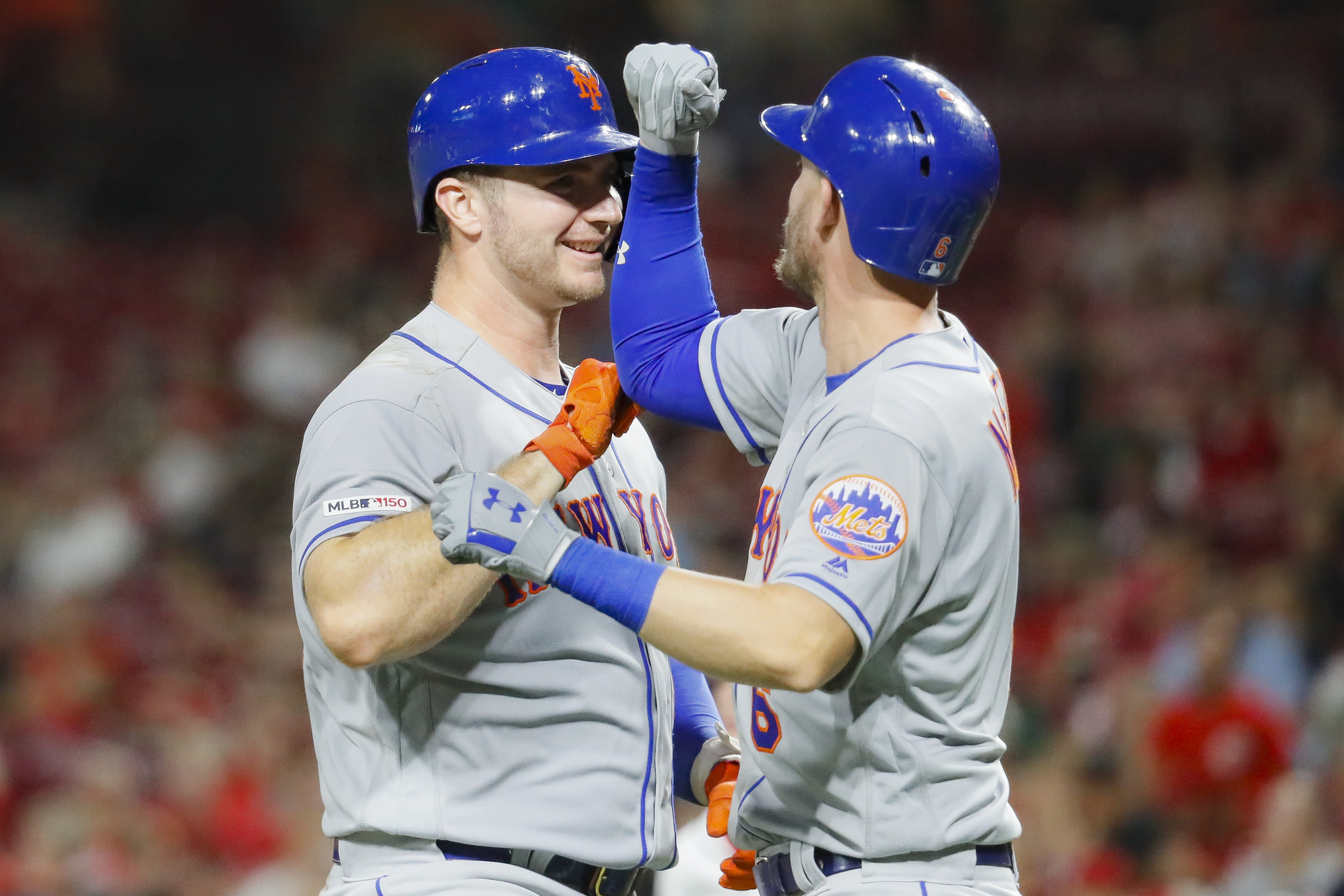 Pete Alonso began the 2019 season fighting just to make the New York Mets‘ Opening Day roster. He ends it as the National League Rookie of the Year after slugging a rookie record 53 home runs, driving in 120 runs and becoming a cult hero for Mets fans for his energy and enthusiasm and one memorable bare-chested postgame interview.

Alonso was a near unanimous selection of the award’s 30 voters, getting 29 first-place votes. Braves starter Mike Soroka received the other first-place vote and finished second, with Padres shortstop Fernando Tatis Jr. finishing third.

Soroka posted a 2.68 ERA and won 13 games as the ace of the division-winning Braves. Tatis slashed .317/.379/.590 and dazzled fans with his defensive plays in the infield, but an injury ended his season at 84 games.

Alonso’s 53 home runs broke Aaron Judge’s rookie record of 52 set in 2017, as Alonso became the sixth Rookie of the Year in Mets history, the first since Jacob deGrom in 2014. He joins Judge, Giancarlo Stanton and Chris Davis as the only active players with 50 home runs in a season and he’s just the 30th player in major league history to reach that mark. His 120 RBIs are the seventh most for a rookie in major league history and the most since Albert Pujols had 130 in 2001.

Alonso’s storybook season was no sure thing back in spring training, however. Even after leading the minors with 39 home runs in 2018, the Mets had a glut of infielders with Robinson Cano, Jed Lowrie, Todd Frazier and Dominic Smith all in the mix at first, second and third base along with Alonso. There were also concerns about Alonso’s defense, and many teams start their top prospects in Triple-A for a couple weeks to manipulate the player’s service time.

Alonso, however, earned a roster spot after hitting .352 with four home runs in spring training. It also helped that Lowrie and Frazier began the season on the injured list. Alonso, a second-round pick in 2016 out of the University of Florida, ran with the opportunity, hitting .378 with six home runs in his first 12 games. He finished April with nine home runs, bashed 10 more in May and entered the All-Star break with 30 home runs.

In Cleveland, he took home the $1 million prize for winning the Home Run Derby, upstaging fellow rookie Vladimir Guerrero Jr. in the final round with a 23-22 victory after Guerrero had bashed 40 home runs in the semifinals.

“It’s survive and advance,” Alonso said after his win. “You’ve got to go in with kind of a killer instinct. It doesn’t matter how many you hit; you just need to have one more than the guy you’re facing.”

Alonso also won over fans when he pledged 5% of his winnings to the Wounded Warrior Project and another 5% to the Tunnel to Towers Foundation.

Along the way, Alonso became a fan favorite, not just for his prodigious home runs — he hit 15 of at least 430 feet — but also for his infectious joy and his ability to win over New Yorkers. When the Mets began surging back into the playoff race in early August, he issued a not-safe-for-work rallying cry playing off the “Let’s go Mets!” chant. After a walk-off bases-loaded walk beat the Phillies on Sept. 6, Mets teammates ripped off Alonso’s jersey and he conducted interviews on SNY and MLB Network bare-chested.

He wore custom-made cleats on Sept. 11 to honor the victims of 9/11, even ordering a pair for each of his teammates. “For me, I just come from a place where I want to show support, not just for the victims but their families as well, because no one really knows how deep those emotional scars can be,” Alonso said at the time.

He smashed his 42nd home run on Aug. 27, breaking the Mets’ team record shared by Carlos Beltran and Todd Hundley. With three games remaining in the regular season, Alonso was one homer away from tying Judge. He matched him with a home run at home against the Braves in Game 160 and then surpassed Judge in Game 161 with a third-inning home run off Mike Foltynewicz, a towering shot to right-center. Alonso raised both arms over his head in triumph, received hugs from teammates and a standing ovation from the crowd, and then he wiped tears from his eyes while playing first base the following inning.

“To me, it just means so much,” Alonso said after the game. “I didn’t know I was going to be overcome with all that emotion. At that point, I might as well just let it out.”