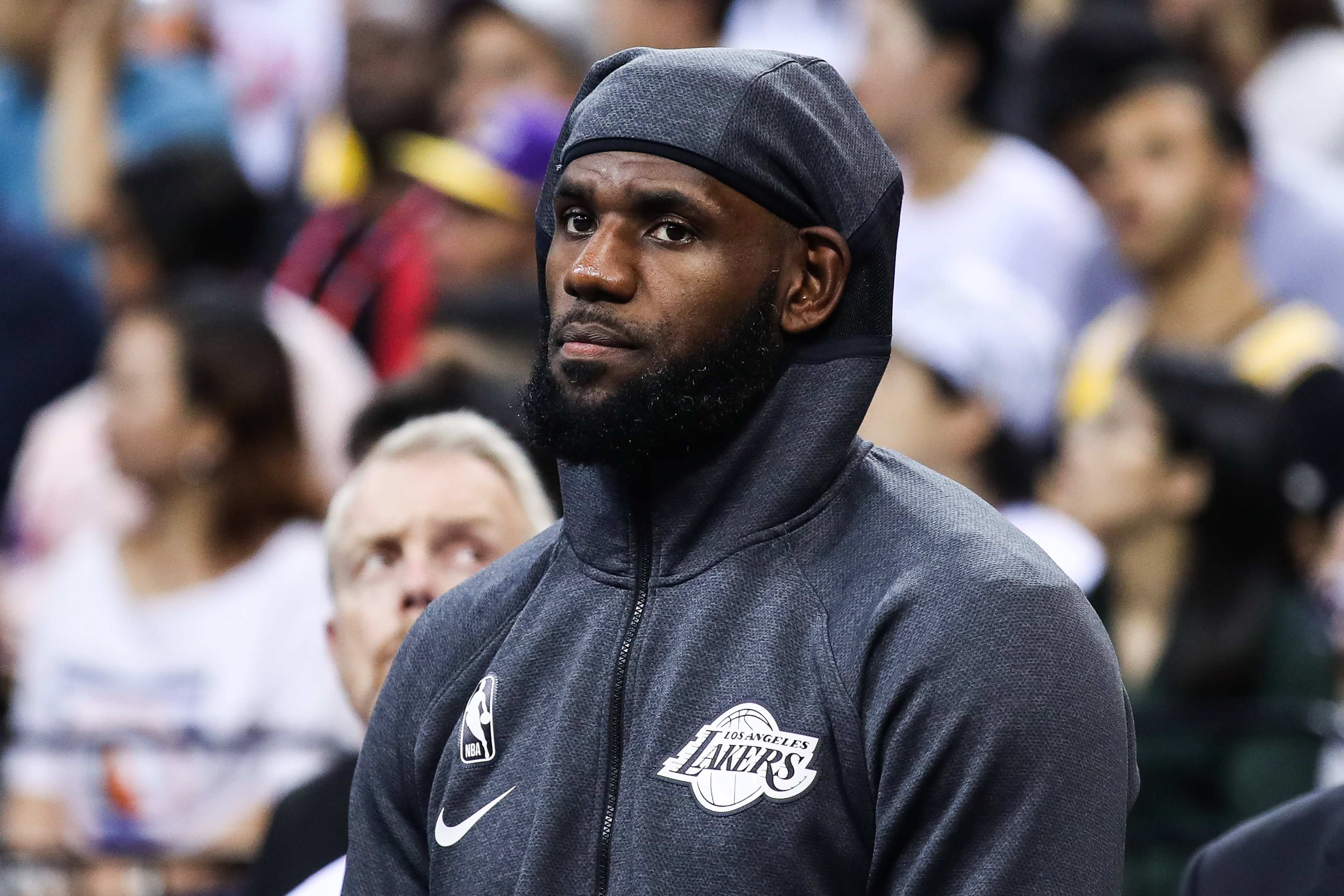 At long last, LeBron James has spoken on the NBA’s China controversy.

And what he said Monday sounded a lot like what what the league’s other thought leaders have had to say — which is mostly nothing critical of the NBA with a side of pleading ignorance.

Except unlike Steve Kerr, Stephen Curry and Gregg Popovich, James saved a special shot for Houston Rockets general manager Daryl Morey and the tweet that launched an international incident on Oct. 5.

James made his long-awaited statement prior to the Los Angeles Lakers’ preseason game against the Golden State Warriors.

“I think when we talk about the political side, I think it’s a very delicate situation, a very sensitive situation,” James said. “Me personally … when I speak about something, I speak about something I’m very knowledgable about, something that hits home for me, something I’m very passionate about. I felt like with this particular situation, there was something not only was I not informed enough about. I just felt like it was something that not only myself or my teammates or our organization had enough information to even talk about it at that point in time, and we still feel the same way.”

James’ sentiments echo those of Kerr and Curry, who have faced prior questions about the controversy. Kerr told reporters on Oct. 7 that “it’s easy to speak on issues that I’m passionate about and feel like I’m well-versed on” when explaining why he declined to comment on the issue involving human rights, freedom of speech and high financial stakes for the NBA.

Curry had a similar stance as his head coach, telling reporters on Oct. 9 “I just don’t know enough about Chinese history and how that’s influenced modern society today in that interaction to speak on it.”

Their comments turned heads as both are commonly outspoken on social and political issues, much like James.

But James wasn’t done. The NBA has caught significant flack for its handling of the situation, most notably deeming Morey’s tweet as “regrettable” for offending “many of our friends and fans in China,” a stance that appeared to prioritize the league’s significant financial interests China over the plight of Hong Kong protesters and Morey’s ability to speak freely in his support of them.

When asked to comment on the league’s handling of the situation, James declined and instead pointed his criticism at Morey for being “misinformed.”

“I’m not here to judge how the league handled the situation,” James said. “I just think that when you’re misinformed or you’re not educated about something — I’m just talking about the tweet itself — you never know the ramifications that can happen. We all see what that did — not only did for our league but for all of us in America and people in China as well. Sometimes you have to think through the things that you say and may cause harm not only for yourself but for the majority of people. And I think that’s just a prime example.”

And to be clear that by “tweet,” he meant Morey’s tweet, James called out Morey by name, deeming Morey as “only thinking … about yourself” while delivering a lesson on the hazards of free speech.

Lakers’ LeBron James on NBA’s China controversy: “I don’t want to get into a … feud with Daryl Morey but I believe he wasn’t educated on the situation at hand and he spoke.” pic.twitter.com/KKrMNU0dKR

“We all do have freedom of speech,” James continued. “But at times there are ramifications for the negative that can happen when you’re not thinking about others and you only think about yourself. I don’t want to get into a word or sentence feud with Daryl Morey, but I believe he wasn’t educated on the situation at hand, and he spoke.

“So many people could have been harmed, not only financially but physically, emotionally spiritually. So just be careful what we tweet, what we say, what we do. Even though yes, we have freedom of speech. There can be a lot of negative that comes with that too.”

Again, Morey’s tweet was in support of Hong Kong citizens standing up to an oppressive Communist regime. While it might have been ill-timed, poorly thought out and holding significant consequences for the NBA, it didn’t involve “not thinking about others.”

But James’ response — much like the rest of the NBA’s — is looking at this situation almost strictly in terms of its impact on the league. And from a report published earlier on Monday, it sounds like James values presenting a united front on the issue that has great significance for the league.

The Athletic’s Shams Charania reported that James led a meeting in Shanghai of Lakers and Brooklyn Nets players as they questioned NBA commissioner Adam Silver over the China controversy and the league’s response. Charania reported that the players who were in China to play in preseason games were concerned about facing questions over the controversy in the foreign country when the league hadn’t formulated a clear stance.

Charania also reported that James expressed a desire to present a united front on the issue. From the report:

James stated that he felt that both teams and all of the players were in this together, and that whatever they decided upon they should stick together, according to sources.

James did little to stray from the company line on Monday.

As for his criticism of Morey, he felt compelled to soften the words he levied during the news conference on Twitter almost immediately after his initial statements.

Let me clear up the confusion. I do not believe there was any consideration for the consequences and ramifications of the tweet. I’m not discussing the substance. Others can talk About that.

My team and this league just went through a difficult week. I think people need to understand what a tweet or statement can do to others. And I believe nobody stopped and considered what would happen. Could have waited a week to send it.

The China situation is obviously one of tremendous complexity and consequence for the NBA. A single tweet set off legitimate international turmoil, and James — along with the rest of the NBA — is forced to respond and deal with the consequences.

The league and its leaders in management and on the court have gone into full-fledged protection mode, presenting a united front that doesn’t risk further alienating a foreign nation threatening to cut off access to its 1.4 billion citizens via state-run media.

It makes perfect sense that the NBA and its players are concerned about protecting the goodwill and financial interests they’ve worked hard for decades to achieve.

But in doing so, a league that proudly touts its progressive bonafides from the commissioner’s office to the sideline to the court is risking its moral high ground.

The China controversy is a dark cloud that’s destined to hover over the NBA for the foreseeable future. As the league is ready to embark on a highly anticipated new season, there are no easy answers.

It’s becoming increasingly clear that James — nor anyone else in the league — has a clue what the right answer is.