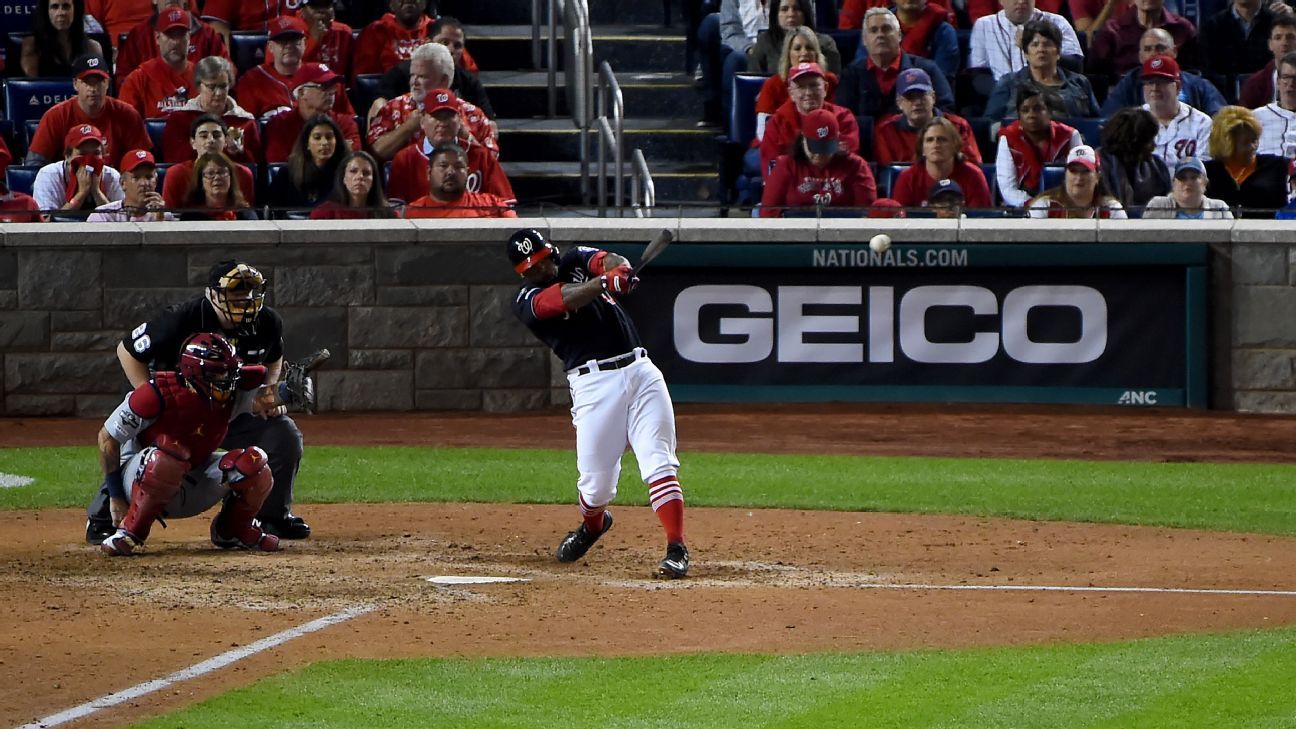 WASHINGTON, D.C. — Howie Kendrick might not be the likeliest of heroes for the Washington Nationals, but neither is the 36-year-old vet the unlikeliest. After all, he has hit .325 the past three seasons — the highest batting average in the majors.

Kendrick went 3-for-4 with three doubles and three RBIs in the Nationals’ 8-1 victory over the Cardinals in Game 3 of the National League Championship Series on Monday. The Nationals are now one win away from the first World Series appearance in franchise history.

Kendrick became just the fourth player to hit three doubles in an LCS game, matching Ben Zobrist, Albert Pujols and Fred McGriff. He also hit the grand slam to beat the Dodgers in Game 5 of the NLDS. He is hitting .314 in the postseason, with nine RBIs in nine games.

“He’s the greatest ever,” teammate Anthony Rendon said after the game. “I mean, you see the man. He’s — what? — 36 years old, and he’s still doing it. He’s built like a frickin’ cinderblock. He’s huge. Man, he stays short. He’s strong. So if he puts that barrel to it and stays behind the ball, you see it. He does damage. So he knows how to hit. That’s what he does.”

“I’m just trying to get smarter,” Kendrick said of his big season and being locked in at the moment. “Making adjustments, I would say, is the biggest thing. Trying to be more efficient with my body and my swing. Kevin Long is a big part of that. Kevin lives out in Phoenix, and I live in Phoenix. It’s funny because the first time we met, I said to him, ‘Hey, what can I do to get better?’ He had a list, like, he had wrote down on a pad of paper. I wasn’t expecting it. This was the first time I had ever hit with him. He had this sheet of paper. He goes, ‘All right. This is what I know about you. This is what you hit with this, this and this.'”

Long became the Nationals’ hitting coach in 2018. Kendrick hit .303 last season but suffered a season-ending Achilles injury on May 19. His work with Long has paid big dividends this season.

Kendrick’s big hit on Monday came against Cardinals ace Jack Flaherty and capped the Nationals’ four-run inning — with all four runs coming with two outs. Kendrick lined a 2-1 fastball into the gap in right-center at 105.5 mph, capping the rally with a two-run double. It was the one hard-hit ball off Flaherty in the inning.

“I didn’t execute the one to Kendrick,” Flaherty said. “That’s the one pitch I want back.”

Kendrick first joined the Nationals in a trade with the Phillies in 2017 and then remained as a free agent.

“I love the team, and I re-signed for two years,” he said. “Last year was bittersweet because I got off to a good start and ruptured my Achilles. Having the ability to come back this year and be a part of this team and to be with the guys in the locker room, that was huge. Me and Kevin and Joe Dillon, we got to continue the process that we’d already started with my hitting, and I just trusted them and stuck with it. They just helped me get better at a time when I really needed to.”

Now in his 14th season in the majors, Kendrick is one win away from his first trip to the World Series.

Rendon was asked what he’ll be doing at 36.

“Hopefully not playing baseball,” he said. “Probably sitting on the couch hanging out with my kids. [Kendrick’s] probably going to play another 20 years.”