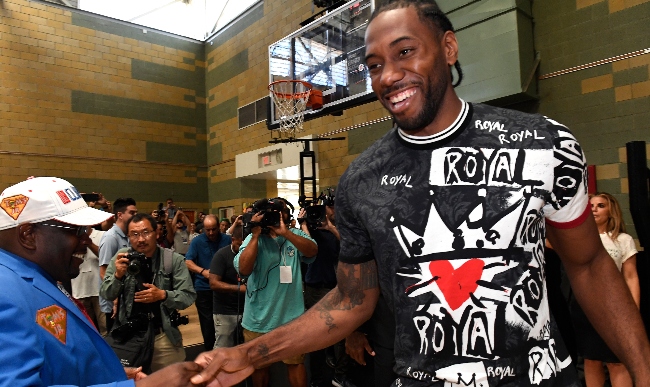 Kawhi Leonard returned home to Los Angeles this summer, signing a max deal with the Clippers and bringing fellow L.A.-native Paul George with him.

Leonard’s decision was as much about basketball as it was a chance to get back home and spend more time with family and friends, and he’s making sure his presence is felt in the community. On Tuesday, Leonard and the Clippers announced they’d partnered with Baby2Baby to gift one million backpacks to kids in the Moreno Valley Unified (where Leonard grew up), Inglewood Unified, and Los Angeles Unified school districts.

Every student in those three school districts will be provided with a backpack, as the initiative aims to reduce stress on low-income families as they get ready for back to school. Leonard, along with Baby2Baby ambassadors like Zooey Deschanel, made the announcement at Leonard’s old elementary school in Moreno Valley.

Kawhi says the Clippers got the kids’ back. pic.twitter.com/tsKtViOEWn

It’s a tremendous gift from Leonard, the Clippers, and Baby2Baby to impact every student in the three districts, which have a high percentage of students from low-income households — 80 percent of students in the L.A. Unified district were eligible for free or reduced lunch a year ago. Leonard said this was “the right way to get started” in his mission to make contributions on and off the court this year in L.A., and that it was important for him to get to impact the community where he grew up.