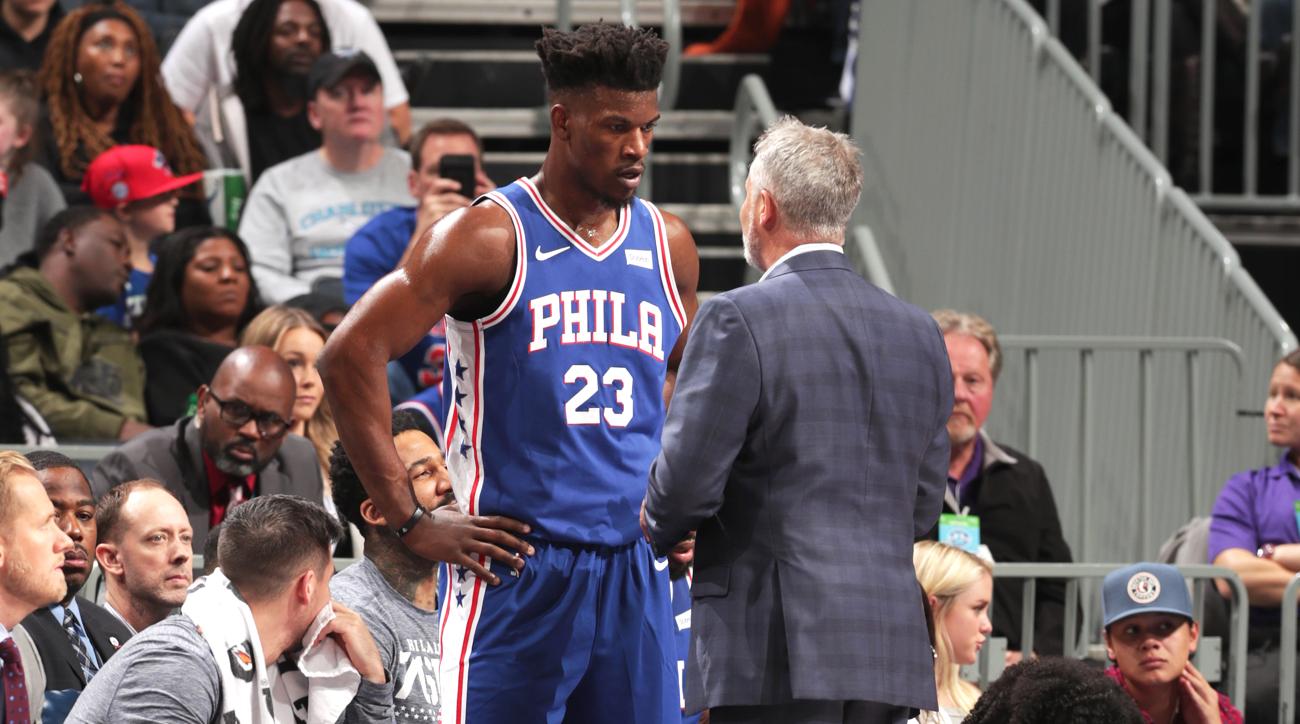 Jimmy Butler is already taking exception to his role on the 76ers, less than two months after the trade that sent him to Philadelphia. Butler has reportedly been vocal about his distaste for how he’s being used in Philly’s offense, including a tense interaction with head coach Brett Brown during a recent film session, according to ESPN’s Ramona Shelburne and Adrian Wojnarowski.

Butler has reportedly met with Brown and Sixers GM Elton Brand about his offensive role, per ESPN. The All-Star prefers to be at the controls of a spread pick-and-roll system instead of just another cog in a more egalitarian offensive system that already features a dominant post scorer in Joel Embiid and a gifted passer, but non-shooter, in Ben Simmons.

Butler has a reputation for being headstrong. He clashed with Bulls coach Fred Hoiberg and publicly called out younger teammates in Chicago before he was mercifully traded to Minnesota on draft day in 2017. Butler would spend one productive season in Minnesota, where he helped lead the Timberwolves to the playoffs for the first time in 14 years, but publicly forced his way out of organization at the start of this season by sitting out training camp and cursing out teammates at practice.

Butler finally got the trade he demanded on Nov. 12 when the Sixers dealt veteran wing Robert Covington and forward Dario Saric to Minnesota. Butler has had two brilliant game-winners already in Philly, but the team hasn’t played much better since his arrival. The Sixers are 14-8 since trading for Butler, good for a .636 winning percentage. Philadelphia was 11-6 (a .647 winning percentage) before the trade.

Making this all the more fascinating is Butler’s impending unrestricted free agency this summer. The Sixers will be able to offer him the biggest contract of any team, but the rest of the league reportedly believes he’ll still take meetings with other organizations, according to ESPN.

Raise your hand if you had the under on when Butler would first clash with Sixers teammates and coaches.

This situation feels entirely predictable. Butler was always going to be an imprecise fit in Philly’s offense with two other high usage superstars in Simmons and Embiid. The Sixers have a unique blend of talent, where Simmons needs to be used as a de facto point guard and Embiid, understandably, demands more post touches than any big man on the league.

If Butler wants to be the lead offensive initiator of a more traditional spread pick-and-roll system, he’s not going to find it in Philly.

Embiid and Simmons on their own already made for something of an awkward fit on offense for the Sixers. Working another star into the system who also prefers to have the ball in his hands in Butler was always going to be a challenge. Sixers brass thought talent and a lockdown defense would win out and make Butler a bet worth taking.

Through two months, it’s still very much a work in progress.

Joel Embiid has also voiced his frustration about his role

Following a win over the Pistons on Dec. 7, Embiid talked about his issues in the Sixers’ offense. From Philly.com:

“I haven’t been myself lately,” Embiid told Philly.com. “I think it’s mainly because of the way I’ve been used, which is I’m being used as a spacer, I guess, a stretch-5, which I’m only shooting [29] percent” from 3-point range.

”But it seems like the past couple games, like with the way I play, our setup, [coach Brett Brown] always has me starting on the perimeter … and it just really frustrates me.”

Part of Embiid’s frustration came from being asked to space the floor to help Simmons and Butler. This is a natural issue for the Sixers because Simmons is a non-shooter, and shooting isn’t a strength of Butler’s game.

Butler’s reported clash with Brett Brown is causing a stir within the NBA world because of his reputation, but Embiid having a similar problem with his role shows the broad issues Philadelphia must address.

This is all too complicated to be solved overnight.

Thus, the Sixers have to … trust the process

Yeah, we said it.

Butler has only played 20 games in a Philly uniform so far. The Sixers gave up two quality players in Covington and Saric to get him, both of whom have thrived in Minnesota. Everyone involved has no choice but to dig deep and try to figure this out.

For his part, Brown reportedly has no issues with his exchange with Butler, per ESPN.

It’s possible everyone can’t be happy in the Sixers’ arrangement, but with three of the 20 best players in the league on their day, there’s simply too much talent here to waste. It’s going to take time, but Embiid, Simmons, and Butler have to be committed to finding cohesion, and Brown may need to adjust his system to make it happen.

Despite the explosive nature of the initial Butler report, his frustration, and indeed Embiid’s frustration as well, isn’t all that surprising. The real intrigue comes with what happens next.