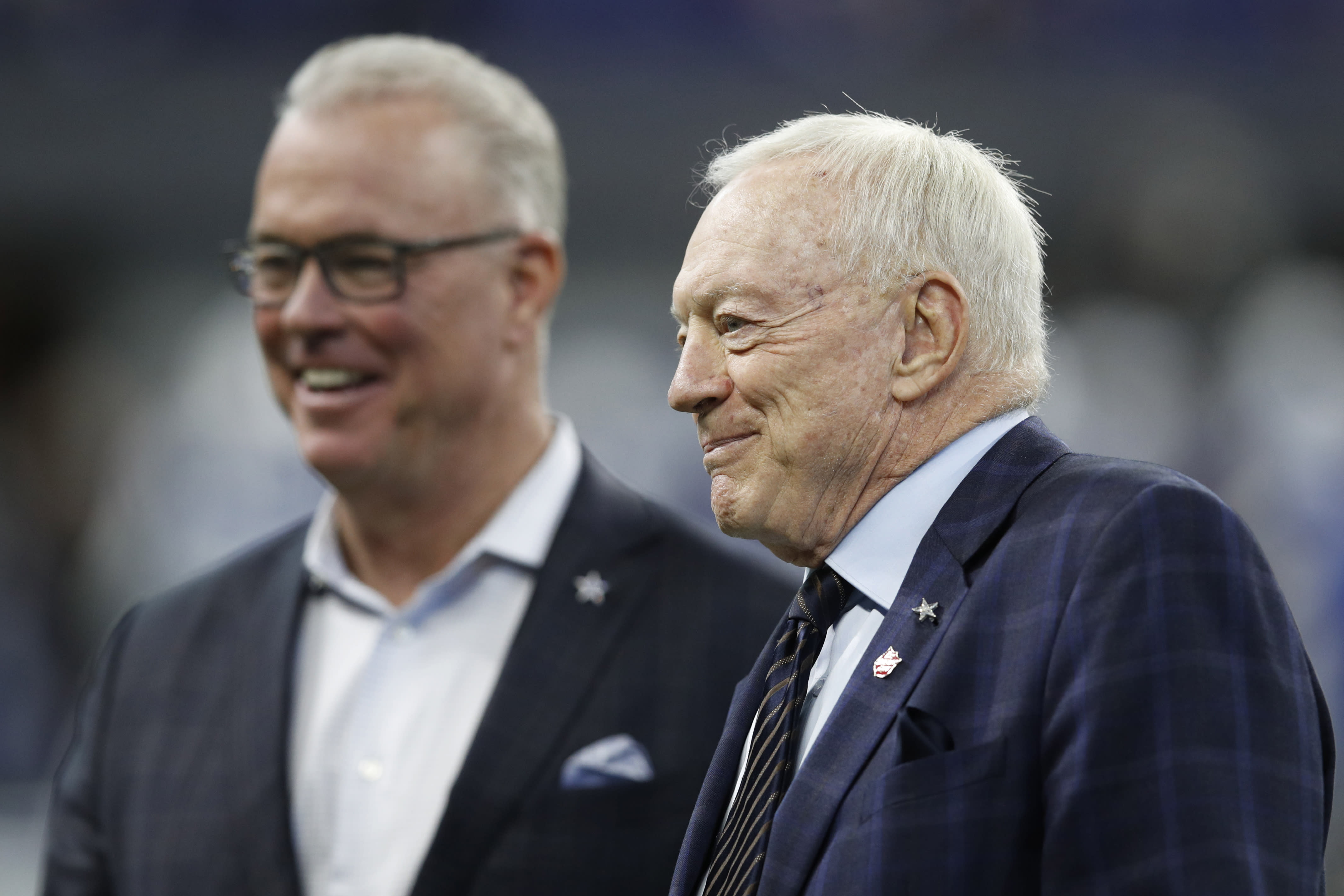 Stephen and Jerry Jones have been engaged in a public smearing of player agents this offseason. (Getty)

With the NFL’s opening weekend less than two weeks away, the Dallas Cowboys contract sagas remain a hot topic.

Ezekiel Elliott, Dak Prescott and Amari Cooper all remain without new deals, with Elliott engaged in a contentious holdout until he’s satisfied.

With the negotiations being played out in public, NFL Network’s Mike Garafalo delivered a nugget of insight Wednesday into how the Cowboys approach negotiations.

It turns out they’re not a big fan of dealing with agents. They’d rather deal directly with players, according to an agent who spoke with Garafalo.

I tweeted earlier about Jerry Jones wishing he could skirt agents to get contracts like Ezekiel Elliott’s done. It’s something Jones and the #Cowboys have tried to do in the past. pic.twitter.com/xG50TT8iKi

“That team is notorious for trying to go around the agent, going right to the player and getting the player to believe ‘hey it’s better to be a Dallas Cowboy,’” Garafalo said an agent told him on Wednesday.

On one hand, this could be construed as a surprising revelation in that the practice would violate U.S. labor laws and the collective bargaining agreement, as Pro Football Talk points out.

On another hand, it’s not the least bit surprising. Especially considering that team owner Jerry Jones all but admitted to the practice on Dallas radio Wednesday morning.

“When you cut out people in between the money and the player, we all know that agents, attorneys have their agendas,” Jones told 105.3 The Fan, per The Athletic’s Jon Machota. “By the way, they are all taking money out of the pie too when they’re there. The straighter it goes from the source to the one receiving it, nine times out of 10, that’s more efficient.”

Part of a trend for Cowboys

Wednesday was not the first time the Cowboys set agents in their sights during this offseason of negotiations.

Son of Jerry and team COO Stephen Jones used the platform of announcing a new deal with linebacker Jaylon Smith on Aug. 21 to deliver a not-so subtle message to the players they’re still negotiating with about their agents.

“I have a lot of respect for, you know, most agents,” Jones told reporters. “I really do. I think they’re trying to do their job for these players. But I do think sometimes they don’t have the end game that maybe the players should and we do.”

Current Cowboys ‘not buying it’

According to Garafalo, these pleas from the Cowboys to ignore their agents are falling on deaf ears for Cooper, Prescott and Elliott, who has spent much of his holdout in Cabo San Lucas, Mexico, long out of earshot of Cowboys brass.

“Zeke and even Dak and Amari Cooper, they’re not buying it,” Garafalo said his agent source told him. “They’re actually listening to their representation. He feels like maybe Jerry Jones is starting to get a little frustrated because some of his old tricks aren’t working.”

Meanwhile, Pro Football Talk reports that the NFLPA is taking notice of the talks of this practice and is “doing its due diligence” before deciding how to act.

Of course none of this should be surprising.

The next time Jerry Jones cares about following protocol in NFL dealings will will be the first. That he’s brazenly flaunting that he’s flirting with CBA violations in the name of getting deals done is very much on brand.