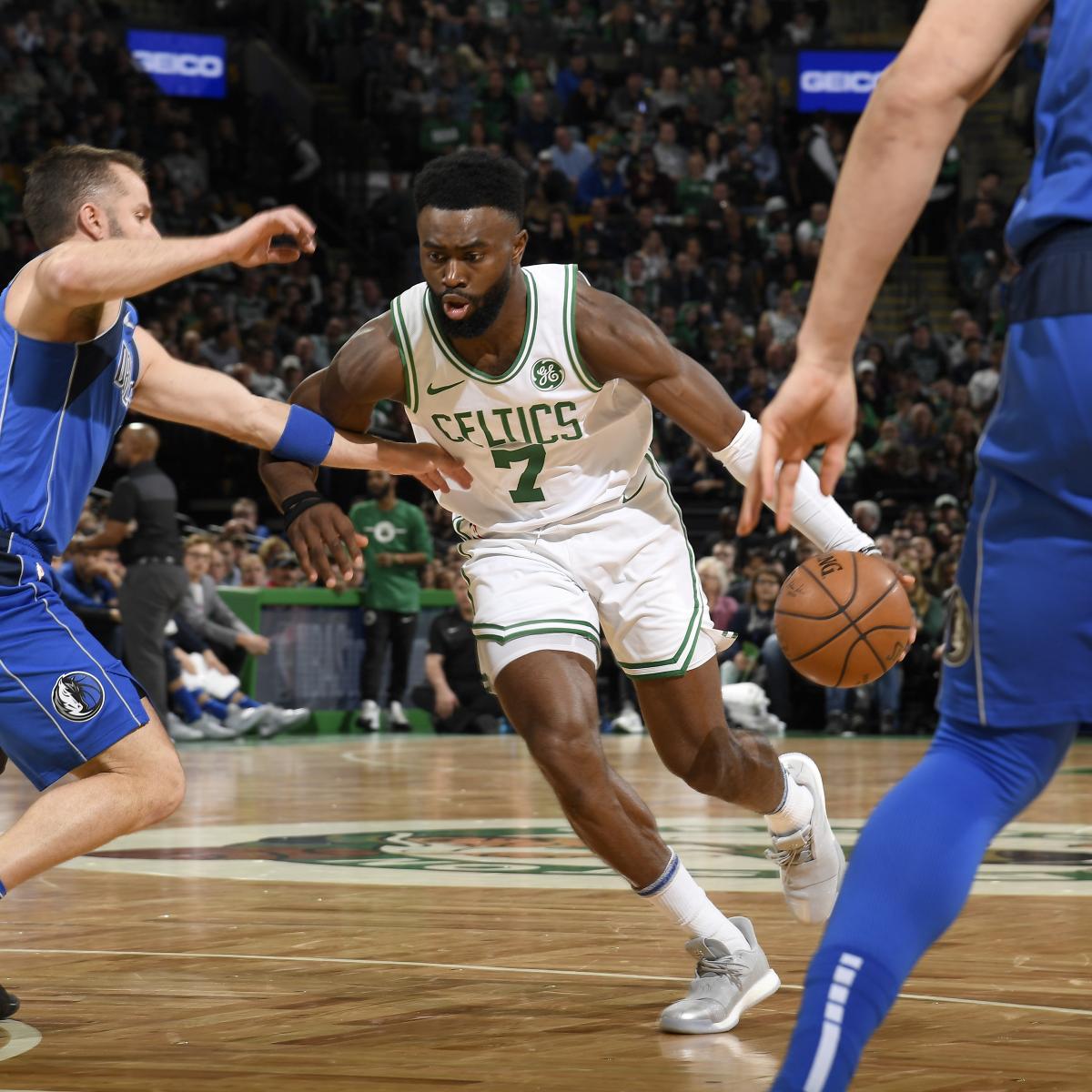 Despite not having Kyrie Irving for a second straight game, the Boston Celtics took care of business on their home court with a 114-93 victory over the Dallas Mavericks at TD Garden on Friday night.

Irving, who is dealing with eye inflammation, has been the go-to guy in Boston all season. The five-time All-Star leads the team in scoring (23.1 points per game) and assists (6.6 per game), but his absence opened the door for other Celtics to take the reins.

With Marcus Morris also sitting out for the Celtics, Jaylen Brown took advantage of his first start in more than two weeks. The third-year guard scored a game-high 21 points on 9-of-15 shooting and had three steals.

One reason for the Celtics’ early-season struggles was directly related to Brown’s struggles on both sides of the ball.

Per ESPN Stats & Information (h/t ESPN.com’s Jackie MacMullan), Brown was among the worst offensive players in the NBA through the season’s first 20 games:

“According to ESPN Stats & Information, with Brown on the floor through those first 20 contests, the Celtics averaged 100.4 points per game, which would qualify them as the worst offensive team in the league. With Brown off the floor, the Celtics ranked 10th offensively. Brown’s turnovers ran neck-and-neck with his assists; he was shooting 25.3 percent on 3s, ranking him 122nd out of 123 players who attempted at least 75 shots.”

Fast-forward to Friday’s game, and Brown is looking more like the budding star Celtics fans were expecting after a breakout 2017-18.

Over his last five games, Brown is shooting 33-of-52. He’s climbed 47 spots in the Real Plus-Minus ratings, per ESPN.com. It’s still not where the Celtics need him to be, but there’s a clear indication things are trending in the right direction for the 22-year-old.

Jaylen Brown’s midrange game has been on point for a while now. He’s really found comfort in the pullup and fadeaway.

Few things have gone as expected for Boston this season, yet head coach Brad Stevens still has the team a respectable 23-15. The Celtics beat Dallas without the services of Irving, Marcus Morris or Robert Williams.

It’s also difficult to give up on this roster because there’s so much young talent, like Brown and Jayson Tatum, and a veteran like Gordon Hayward who played at an All-Star level in the not-too-distant past.

The Eastern Conference isn’t quite as jam-packed as the West, but the gap between the No. 1 seed (Milwaukee Bucks) and No. 5 (Celtics) was 4.5 games entering Friday.

Boston is only three losses behind the Toronto Raptors in the Atlantic Division. The Raptors have shown cracks in their once-strong foundation lately with a 5-5 record in the past 10 games, including blowout losses on the road against the Orlando Magic and San Antonio Spurs.

The Celtics have won five of their last eight games. Irving is the driving force for the team, but finding a consistent No. 2 scorer behind him is what has been missing all season.

Brown’s recent hot streak provides a sense of optimism that Boston has found what it needs to finally break out and take over the East like it was assumed would happen back in October.

The Mavs will play their fourth consecutive away game on Saturday against the Philadelphia 76ers. The Celtics will take off the rest of the weekend before hosting the Brooklyn Nets on Monday.