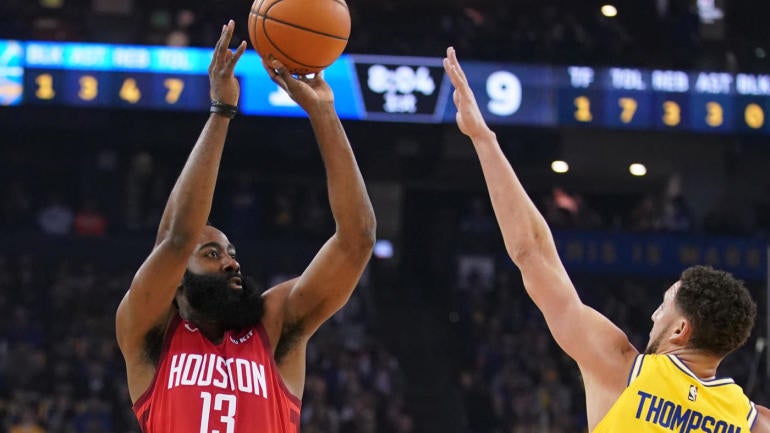 OAKLAND, Calif. — James Harden is not of this Earth. The Houston Rockets guard put up 44 points, 15 assists and 10 rebounds on Thursday night, capping it off with a ridiculously contested game-winning 3-pointer with one second left in overtime to beat the Golden State Warriors, 135-134.

Clint Capela added 29 points and 21 rebounds for the Rockets, while Stephen Curry led the Warriors with 35 points in the loss.

Here are some takeaways from the game.

With no Chris Paul or Eric Gordon, the Warriors could essentially throw all of their defensive attention at Harden — it didn’t matter. Sure, Harden’s efficiency was lacking, but he absolutely willed the Rockets back into the game in the third quarter with improbable step-back 3-pointers and miraculous assists, and continued his magic into the overtime period. Capela feasted on the Warriors’ soft interior largely due to what seemed like an infinite number of slick setups from Harden. The reigning MVP is on one of the most impressive scoring streaks we’ve seen in quite some time, and Thursday was no exception.

Harden was phenomenal, to be sure, but he was aided by a full cast of characters who stepped up throughout the game to keep the Rockets afloat. Austin Rivers was a one-man offense at times, while Gerald Green was doing his best Klay Thompson impression, launching 3-pointers at will. Overall the Rockets had five players in double-figures, not something you would expect to see looking at Houston’s depleted roster.

Despite a relatively slow start that included missed shots and sloppy turnovers, Curry got things going after making a high-arcing contested 3-pointer from the corner midway through the first quarter. The shot seemed to energize him, and he kept it going throughout the game, making shots from deep and finishing around the rim. With a relatively slow night from Kevin Durant, the Warriors needed Curry’s playmaking and shot creation.

The Houston defense took a considerable step backwards to start the season, at least partially due to the loss of Trevor Ariza and Luc Richard Mbah a Moute, but they have been better during the team’s recent hot stretch, and were all over the court on Thursday against the Warriors. PJ Tucker did an exemplary job guarding Durant for most of the night, while having the versatility to jump out on Curry or Thompson after switches. Overall the defense was just wreaking havoc, and it’s a big reason why Houston was able to turn this into an incredible game.