If the NFL wants to fix officiating atrocities like Packers-Lions, it can start as soon as this week 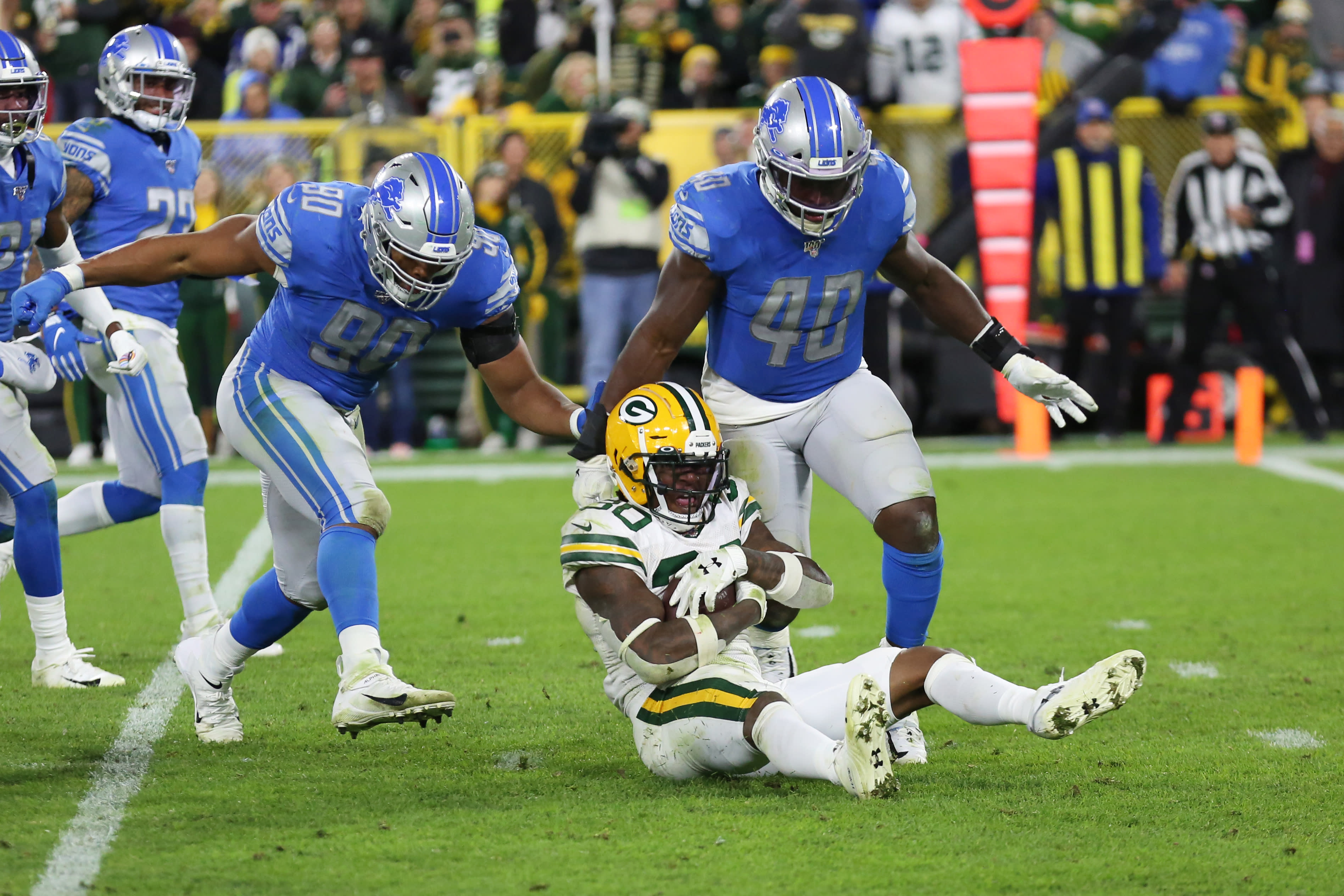 Trey Flowers (90) and the Detroit Lions were the latest victims of the NFL’s horrible officiating to start this season. (Getty)

Detroit Lions fans are used to watching their team losing in Green Bay. Prior to the Lions’ Monday night showdown against the Packers, Detroit had gone 3-26 in its previous 29 games in Wisconsin, so the fact the Lions eventually fell 23-22 to the Packers on the road again wasn’t a shock.

But the way it happened, with an abundance of horrific late calls going against Detroit? Well, I wish I could say that was a new one — many remember the infamous “process of a catch” ruling against Calvin Johnson — but regardless, the Lions’ latest loss in Green Bay was still a result consistent with one of the worst-officiated seasons in recent memory.

Make no mistake about it: On Monday night, the referees again seized center stage in an entertaining prime-time game by flagging Lions defensive end Trey Flowers — twice! — for phantom illegal hands to the face penalties that extended a pair of Packer scoring drives, including one that led to a critical touchdown and another that (predictably) ended with a Mason Crosby game-winning field goal as time expired.

Replays for both showed that Flowers’ hands were on the neck and shoulder of Packers left tackle David Bakhtiari, not his face. Meanwhile, Flowers’ face after each, which bore a rare combination of anger, disgust and bewilderment, told the story.

“I didn’t think hands to the chest was a penalty,” Flowers told WXYZ Detroit afterward.

The reaction across social media was frenzied, as Football Twitter — including mild-mannered Lions legend Barry Sanders (!) — ripped the NFL for allowing another game to devolve into an argument about officiating competency and what can be done about it.

That is sickening… the @NFL needs to look at a way to prevent that from happening. Two phantom hands to the face calls really hurts us tonight. Yes, we could have scored TDs, but @Lions played too well to have the game end this way. #DETvsGB @espn

And while Sanders is right about the Lions’ shortcomings — yes, they could have helped their cause Monday by scoring touchdowns instead of settling for five field goals — he’s also right about the officiating, which has officially hit a crisis point in 2019 after weeks of uproar around the league.

If the leagues’s team owners really want to fix it, they can start this week at the annual fall meetings by reconsidering the possibility of instituting a “sky judge” official, someone with the authority to correct obvious bad calls or non-calls in real time.

The concept had support among coaches at the NFL’s annual spring meeting in March, but was ultimately shot down by the NFL due to concerns about it being officiating overkill and potentially being difficult to implement, since new sky judges would have to be trained and procedures would need to be standardized from crew to crew.

Instead, the NFL instituted an expansion of the current challenge system — one that allows head coaches to challenge pass interference, both called and uncalled, for “clear and obvious” penalties — that has been completely ineffective.

Considering the fact that through six weeks, most of the coaches’ challenges have failed to result in an overturn, it’s hard to come away thinking the expansion was anything more than the NFL’s equivalent of officiating window-dressing, one that would allow them to say they “fixed” the problem without doing anything about it at all.

So yes, changes must come. Monday’s cruel calls overshadowed another strong performance by Matt Patricia’s Lions, a team (and regime) that was left for dead by many before the season. Over the course of the first six weeks, Patricia’s Lions look well-coached and playoff-worthy at best, and competent at worst. The defense is playing its tail off, with the offense generally doing enough to win.

To be sure, the Lions’ unexpected turnaround is worthy of attention … but good luck finding anyone to talk about that Tuesday. Instead, people will be talking about the calls that shouldn’t have been, allowed by the league that refuses to commit fully to fixing its officiating problem.

And the longer this stretch of horrific officiating continues, the more credibility the NFL and its hallowed shield will lose — one bogus call at a time.