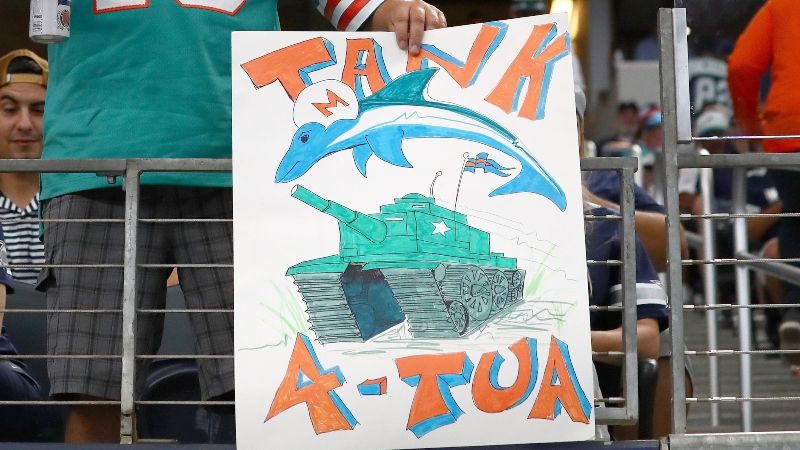 Yahoo! is partnering with The Action Network during the football season to bring you expert sports betting information and analysis. Analysis provided by Darren Rovell.

The Miami Dolphins are 0-3, giving up 133 points while scoring just 16. Sounds pretty awful. But are they on track to be the worst team ever?

To assess how bad they are, we had longtime bookmaker Johnny Avello set the spread for the 2019 Dolphins against some of the worst NFL teams of the past 35 years. Avello now runs DraftKings Sportsbook, where Action Network users get a risk-free bet up to $200.

Would the Dolphins be favored against any of them?

Jerry’s first team had a rookie in Troy Aikman at quarterback. Aikman missed five games and Steve Walsh came to the rescue, getting the Cowboys their only win that year. This was the first season in the history of Monday Night Football (since 1970) that did not feature at least one Cowboys game.

Another 1-15 team, but the Pats lost three games by three points, showing they had the capacity to win. Former Raiders quarterback Marc Wilson finished the season with six touchdowns and 11 interceptions. Their only win was against a Colts team that finished the season 7-9. The 1990 Patriots and the 1981 Baltimore Colts are the only teams since 1940 to have 11 losses in a season in which they never led in that game.

The expansion Cleveland Browns had really bad games, but also some decent games. They lost 43-0 on opening day to the Pittsburgh Steelers and started 0-7 before the “New Browns” finally got their first win against the New Orleans Saints.

From the Browns’ 42-yard line, Tim Couch threw a Hail Mary that was tipped in the endzone by Saints defenders, but was caught by the Browns’ Kevin Johnson.

The team finished 2-14, but they could have easily won five games that season. They lost two home games by one point.

Oh, the great triumvirate of Charlie Batch, Ty Detmer and Mike McMahon at the helm! This team, Matt Millen’s first as general manager, started 2-10 and won two games by a total of seven points. This was the final season that the Lions played at the Pontiac Silverdome before moving to Ford Field. They had some talent, but they had a stretch of nine games where they lost by a total of 42 points (4.66 points per game average).

The infamous 0-16 team is not really a candidate for the worst team ever. Hey, they went 4-0 in the preseason and Kevin Smith ran for nearly 1,000 yards. Since that year, only one Lions running back rushed for more yards in a season (Reggie Bush, 2013). The team also scored at least 20 points in half of their games.

The 2007 version of the Dolphins (1-15) was nothing to boast about on offense — Remember Cleo Lemon? But on defense they at least had names, including Jason Taylor and Joey Porter, even though they were both past their prime.

Was George Siefert a good coach or did he just have the right talent in San Francisco? Well, we know what happened when he had the wrong talent — another Heisman go wrong story in Chris Weinke and a 1-15 record.

This Panthers became the only team to win its opener and then go on to lose fifteen straight. It was a team that knew it was losing and just couldn’t close deal, including two losses by one point, one loss by two points and three losses by three points, with two losses coming in overtime.

This team did beat, aided by rain and wind, Bruce Coslet’s 8-8 Jets at Giants Stadium, but they also failed to score a touchdown in nine games, scoring more than 10 points only once through Week 10. They ended the season with 12 games of scoring 10 points or less, a record since the 1970 merger.

This team did not have Bo Jackson, but it did have a young Steve Young, who didn’t have much help. Young came into the season Week 3 after Steve DeBerg threw nine interceptions in less than two games. Defense was not a strong suit as this team gave up nearly 30 points per game.

Rich Kotite’s starter for the first six games of the season, in which they went 0-6, was Neil O’Donnell, who then got hurt. The lone win of the season was against former Jets quarterback Boomer Esiason and the Arizona Cardinals (Boomer didn’t play in that game.)

When Marc Bulger went down, the Rams were left with Kyle Boller and Keith Null as signal callers. With that type of talent, even 1,400 rushing yards from Steven Jackson isn’t going to save you.

This pitiful team only got a victory thanks to the fact that they got a date with the Lions, who themselves were coming off an 0-16 season. The Rams team lost seven of their games by 20 or more and were outscored on the season by 261 points.