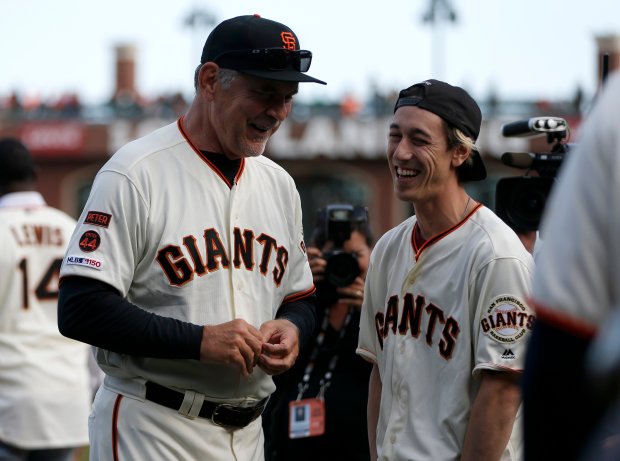 SAN FRANCISCO — The Giants brought dozens of players back to Oracle Park to honor Bruce Bochy on Sunday, and the final one to walk through the center field gates brought the house down.

Tim Lincecum made his first public appearance at the ballpark since 2015 and was showered with the loudest standing ovation of the day. He waved to a sellout crowd and then walked to the infield with other members of the 2014 World Series team, embracing Bochy near the mound.

Lincecum famously is private, but the Giants had hoped all season long that he would show up for the ceremony. Lincecum spent Sunday’s game in a suite watching Bochy’s final game with dozens of former teammates. The group included Marco Scutaro, Cody Ross, Ryan Vogelsong, Javier Lopez, Angel Pagan, Jeremy Affeldt, Pat Burrell, Gregor Blanco and others who were a big part of the championship years.

The ceremony also included Bochy’s former teammates and coaches, members of his first Giants team, and some of his former bosses. The Giants set up a couple dozen chairs on the field for team executives and former Giants. Former GM Bobby Evans came out for the ceremony and sat with Farhan Zaidi, Brian Sabean, Rob Dean and Larry Baer.

In front of them was a stunning collection of baseball talent. Willie Mays sat with Juan Marichal, Orlando Cepeda and Felipe Alou.

Those men were all part of Bochy’s time here, and on the other side of the podium sat the people who will help fill his future days. Bochy’s sister and two brothers sat with his two sons, their wives and his two grandchildren.