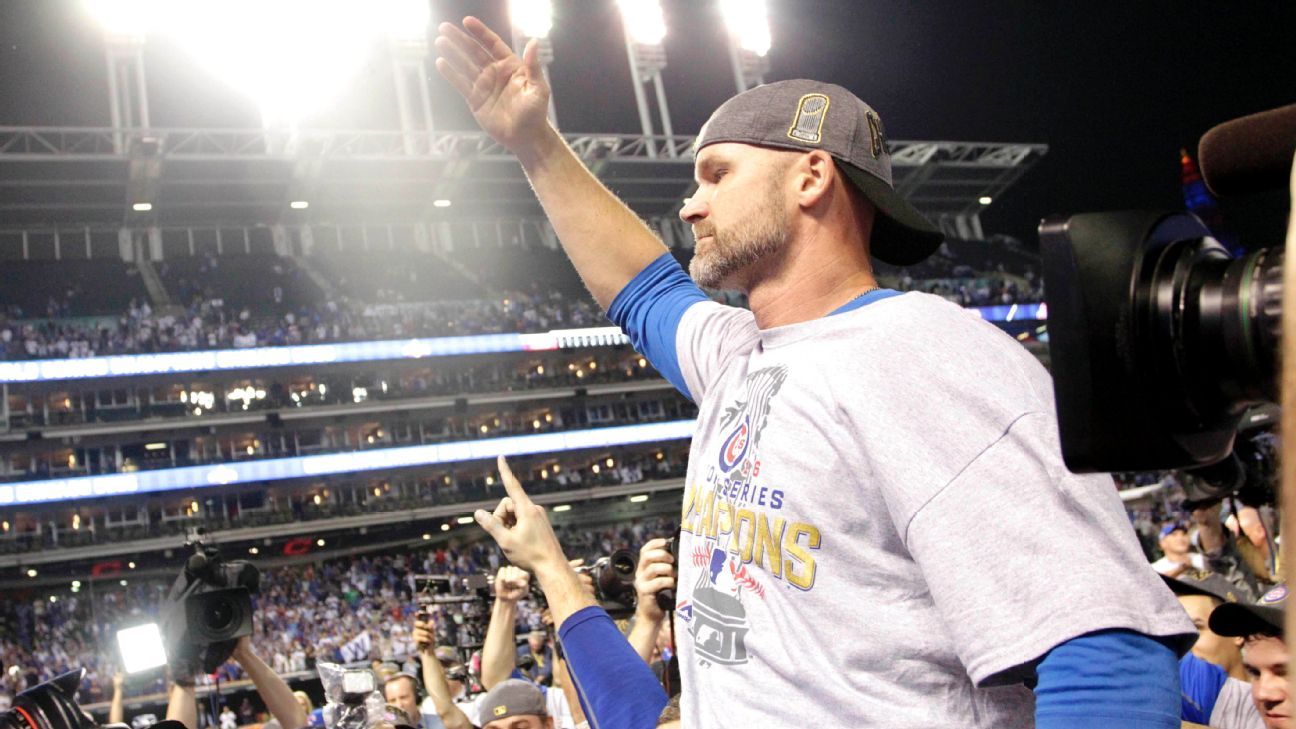 Former Chicago Cubs catcher David Ross, who is considered a leading candidate to succeed Joe Maddon as the team’s manager, was asked during Sunday’s Baseball Tonight show if he’d be interested in the job if the Cubs called.

“I think it’s one of the best jobs in baseball,” said Ross, who currently works as an analyst for ESPN. “I’ve got a lot of close ties with those guys. I think the interest would be there. I think my heart is drawn to that dugout a little bit.

“The rumors are flattering. It makes you think about a lot of things. I’ve got a nice job here at ESPN that I enjoy and gives me a lot of free time with my three kids.”

Ross, 42, played the final two seasons of his career with the Cubs, winning a World Series in 2016. He was asked if his close relationship with the players would be a hindrance or a help.

“You never know until you sit in the manager’s seat how hard it really is to have those tough conversations with guys. I’m kind of an open person; when I was teammates with a lot of these guys I shot them straight.

“I loved my teammates when I played with them; every team that I played for. But I also try to tell guys the truth in love, and so I think the best managers I have had do that exact same thing — they have great conversations, they communicate, they walk that line between authority and leadership and being a friend as well. I think that’s the line you’ve got to kind of walk with players and you never know until you are in that seat.

“I’ve got a lot of thinking to do if this gets presented to me as everyone says will happen. I’m sure waiting for that phone call.”

Cubs third baseman Kris Bryant said he would not be surprised if Ross gets that call.

“I’ve always looked at Rossy as a coach when he played here,” Bryant said. “Yeah, it was goofy, it was fun, it was energetic. But when he needed to tell you something, he let you hear it. From the very get-go, I felt like this guy will be a manager some day for sure.”

Cubs All-Star first baseman Anthony Rizzo was also asked about the possibility of playing for Ross, his good friend and former teammate.

“If it was Rossy, I’d obviously sit down; I’ve talked to him about it before,” Rizzo said. “He’s in a really good place now at home with his family and what he’s doing and he’s happy. The pros and the cons. I mean, he’s the biggest mentor in this game other than [Maddon]. Can it work? Yes. But I don’t know which direction we are going in.”

Other candidates for the opening include Cubs bench coach Mark Loretta; Kevin Youkilis, who is a Cubs Cubs assistant; and Mark DeRosa, who works as an analyst for MLB Network. None of them has previous big league managerial experience.

If hired by the Cubs or another organization, Ross would follow in the footsteps of Boston’s Alex Cora and the Yankees’ Aaron Boone as first-time managers who also spent time as ESPN analysts following their playing days.