Doug Pederson on whether Eagles considered Colin Kaepernick: “We consider everybody” 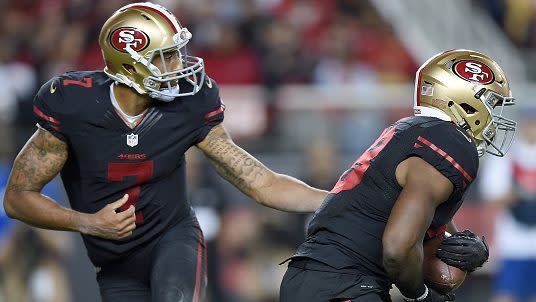 The Eagles needed a quarterback. They signed one who had retired from the NFL, not one who has recently made clear his ongoing desire to get back in.

Some have justified Kaepernick’s failure to get a call from teams looking for a bottom-of-depth-chart quarterback by ponting out that Kaepernick wouldn’t accept the contract that comes with such a gig. But with the Eagles reportedly giving McCown $2 million guaranteed on a contract worth up to $5.2 million to serve as the backup to a quarterback with a history of in-season injuries (which obviously increases the backup’s chances of playing), Kaepernick possibly may have accepted an offer that by definition has placed McCown at No. 2.

Kaepernick didn’t get a chance to.

With no specific explanation from Pederson as to why it wasn’t “best for the Eagles” to consider Kaepernick, many will believe that his NFL shunning continues. And if the Eagles — the team that gave Mike Vick his post-dogfighting-incarceration opportunity in 2009 — won’t bring Kaepernick in for a workout or talk to him about a possible contract given an RPO-fueled offense that seems to be suited to his run-pass skills, no one will.