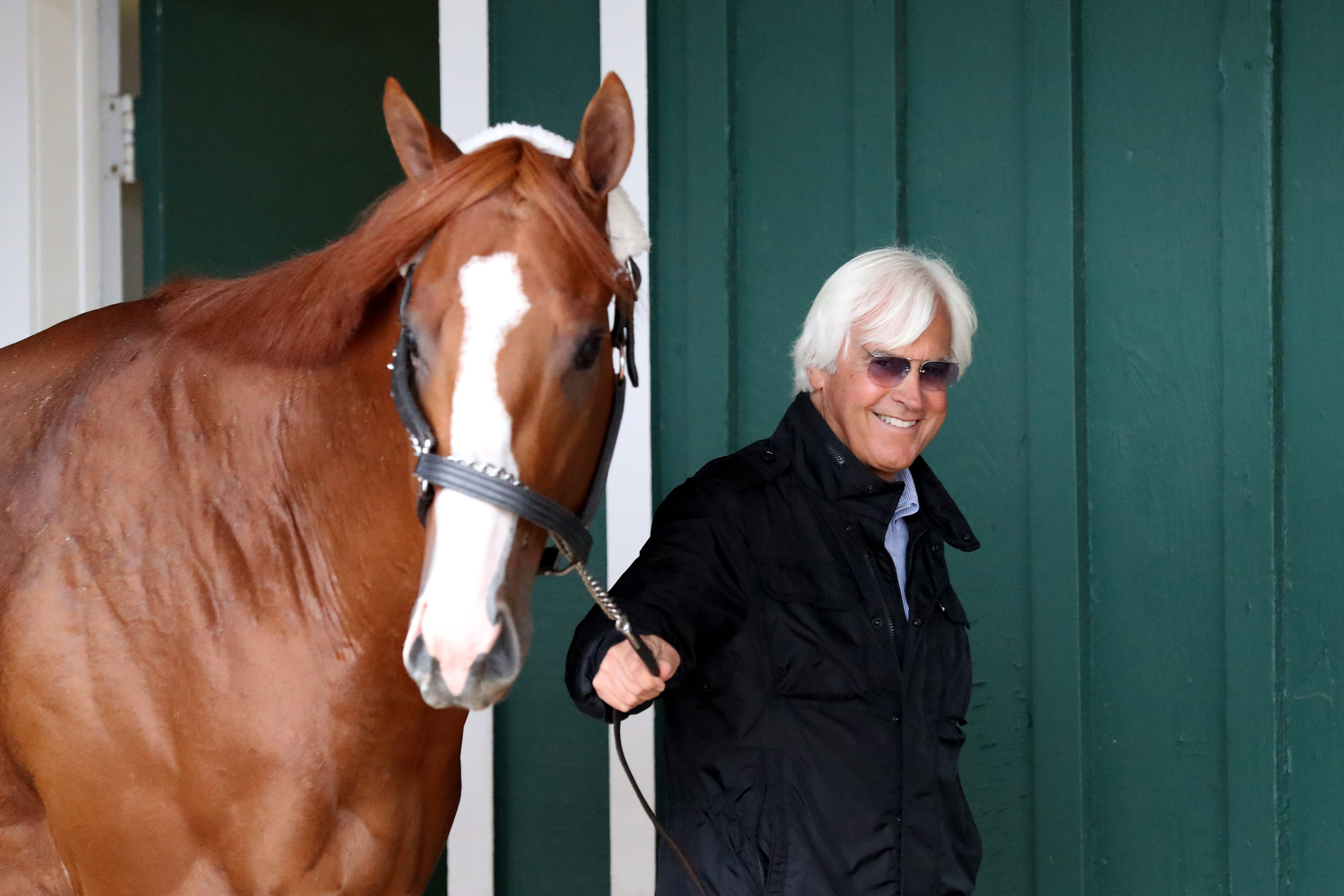 Justify won the 150th running on the Belmont Stakes to complete the 13th Triple Crown in horse racing history. (Getty)

On Wednesday, the New York Times reported that the colt failed a drug test prior to the Kentucky Derby and shouldn’t have been eligible to race to begin with.

The Times reports that the horse tested positive for scopolamine, a banned performance-enhancer, after winning the Santa Anita Derby on April 7, 2018.

According to the report, California regulators waited nearly three weeks to notify Justify’s trainer Bob Baffert of the positive test result, nine days before the May 5 running of the Kentucky Derby.

The timeline means that Baffert entered his horse knowing about the positive test. Few others at the time were aware, according to the report.

Instead of immediately disqualifying the Kentucky Derby favorite, the California Horse Racing Board took more than a month to confirm the results and withheld from publicly disclosing the results when it did, according to the report.

The board eventually decided to drop the case and moved to lessen the penalty for testing positive for scopolamine by the time Justify had won the Preakness Stakes and Belmont Stakes to complete the Triple Crown, according to the report.

The Times reports that two months after Justify completed the Triple Crown, the board concluded that the positive test could have resulted from Justify eating contaminated food and dropped the inquiry before changing the penalty of a positive scopolamine test to a fine and possible suspension in October.

California Horse Racing Board director Rick Baedeker told the Times that it moved slowly on the case due to the nature of the positive test.

“There was no way that we could have come up with an investigative report prior to the Kentucky Derby,” Baedeker said. “That’s impossible. Well, that’s not impossible, that would have been careless and reckless for us to tell an investigator what usually takes you two months, you have to get done in five days, eight days. We weren’t going to do that.”

Baffert did not respond to the Times’ request for comment.

The report notes that the presence of jimson weed that is sometimes found in horse feed can result in a positive test for scopolamine.

The Times spoke with Dr. Rick Sams, who ran the drug lab for the Kentucky Horse Racing Commission from 2011 to 2018. He said that the amount found in Justify’s system — 300 milligrams — via documents obtained by the Times indicated that its administration was intentional.

“I think it has to come from intentional intervention,” he said.

The California Horse Racing Board investigated Baffert in 2013 when seven of his horses unexpectedly died at Inglewood’s Hollywood Park over the course of 16 months.

Baffert was found to have administered thyroid hormone thyroxine to the horses despite there being no evidence of hypothyroidism that the hormone is intended to treat.

Baffert was exonerated after the board determined that the administration of the drug did not violate any rules.

“It was legally dispensed and reported as labeled,” Dr. Rick Arthur said after overseeing necropsies of the dead horses. “It was within their right to do so. There is no violation of any rules. You want to have an ‘Aha!’ moment, but this was used in his stable all the time.”

Justify was estimated to be valued at $75 million after securing the Triple Crown.