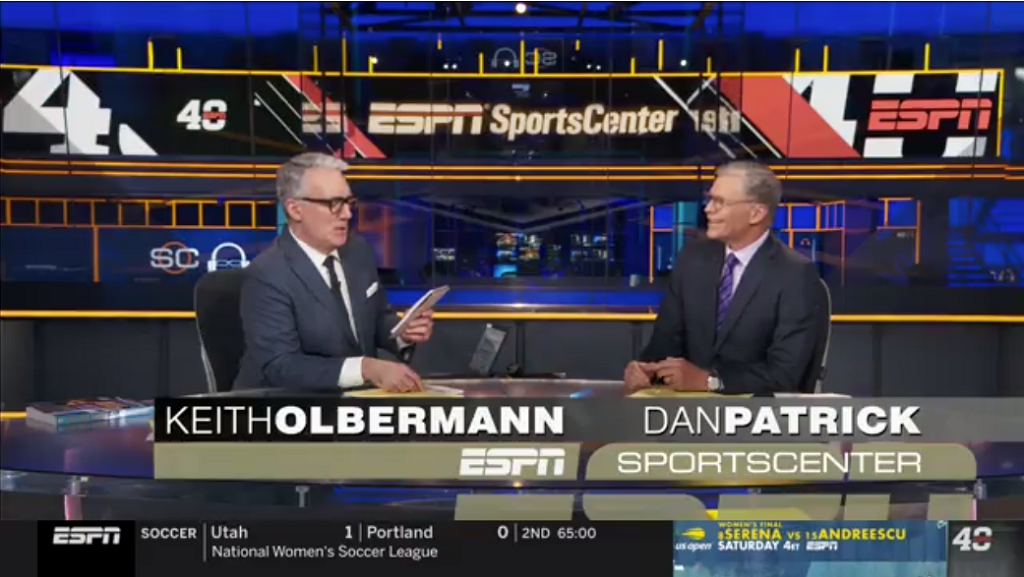 There was a Big Show reunion on Friday night in Bristol, ahead of ESPN’s 40th anniversary on Saturday.

SportsCenter legends Dan Patrick and Keith Olbermann got together to host the show — joining Scott Van Pelt on SportsCenter with SVP — for the first time in 22 years.

The reunion featured retro SportsCenter graphics and music, as well as old video clips and tributes. And Patrick and Olbermann smoothly called highlights — catchphrases included — like they did from 1992 to 1997.

It all finished in cruel fashion, with the screen going black (Sopranos style) after Patrick said, “I think we should announce right now that we should…”

Here’s a look at the intro, as well as more clips and tweets of the Big Show reunion:

What a cool thing to get to do. Those two are legends. Hope you all enjoyed.

What a thrill to see @KeithOlbermann and @dpshow back together on @SportsCenter tonight.

What I would give to do one more show with @StuartScott

SVP’s crew….Sportscenter pre-show meeting. Dan and Keith back at it. pic.twitter.com/U1awmWrIbt

Best thing about watching @dpshow & @KeithOlbermann tonight is not banter/catch phrases, but simply seeing them together again. Their off camera relationship has been like an ekg over past 2 decades; if #espn40 is only remembered for this reunion, that’s plenty. #SportsCenter

Ideas never have guarantees attached to them. Bringing @KeithOlbermann & @dpshow together again could have turned out to be a grand shitshow. But tonight was beautifully played — in myriad ways. Congrats to all involved. #SportsCenter #espn40

I can’t remember the last time I watched SportsCenter. But here I am. And here they are. Welcome back, fellas. pic.twitter.com/zlZyiwuLz1

Earlier on Friday, Patrick and the Danettes talked on his radio show about leaving ESPN and returning for the reunion.

The post Dan Patrick and Keith Olbermann host SportsCenter together for first time in 22 years appeared first on Awful Announcing.