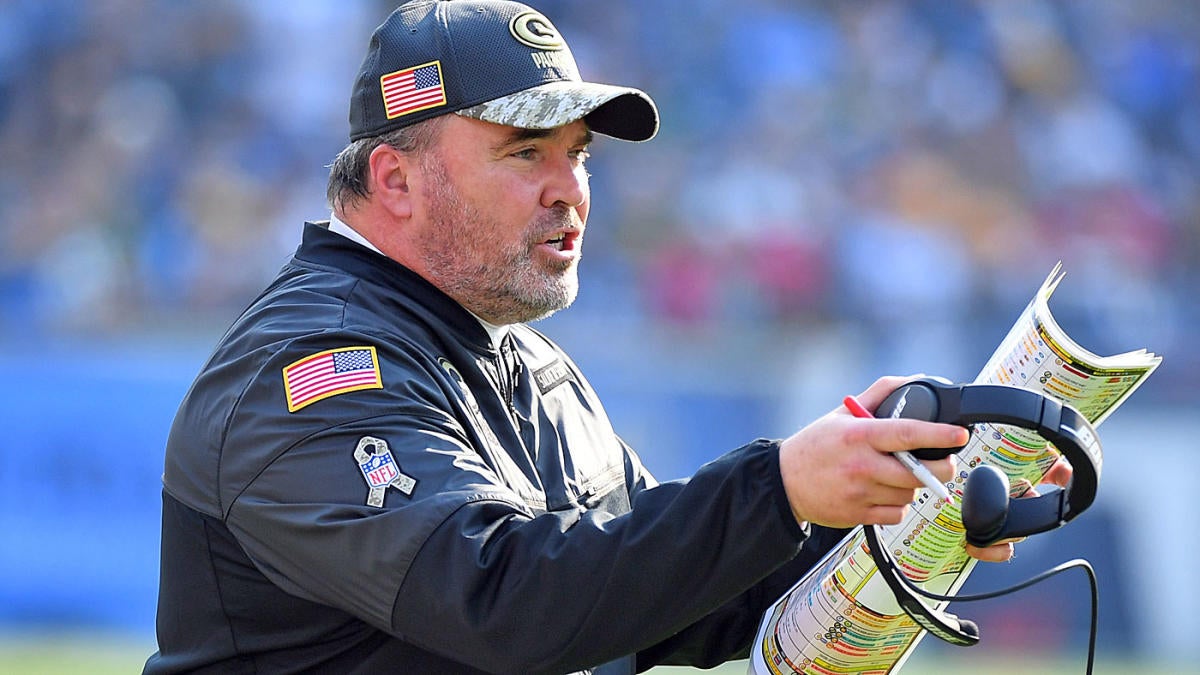 Mike McCarthy started the 2010s by hoisting a Vince Lombardi Trophy as the Green Bay Packers‘ head coach. A decade later, McCarthy is hoping to do the same with the Dallas Cowboys, who on Monday made him their new head coach heading into the new decade.

The 56-year-old coach enjoyed a great deal of success in Green Bay, winning 135 games in nearly 13 seasons with the Packers that included a victory in Super Bowl XLV, four trips to the NFC Championship Game and nine postseason appearances. McCarthy also presided over a Packers team that won 15 games during the 2011 regular season, becoming the sixth head coach to win that many games in a regular season.

McCarthy, who was let go by the Packers 12 games into the 2018 season, will now try to win a Super Bowl with the Cowboys, a franchise that hasn’t added to its collection of Vince Lombardi Trophies in a quarter century. McCarthy is also trying to become the first Super Bowl-winning head coach to lead a second franchise to a world championship.

A Super Bowl win with the Cowboys would catapult McCarthy to the top of the following list; in the meantime, here is our ranking of the best performances by former Super Bowl-winning head coaches during their next NFL stop.

Mike McCarthy is the Cowboys’ new head coach, and there’s a lot to go over. Will Brinson and Sean Wagner-McGough break it all down on the Pick Six Podcast; listen below and be sure to subscribe for daily NFL goodness.

He won two Super Bowls with the Giants, and Parcells’ reclamation work after leaving the Giants is one of his enduring legacies as an NFL head coach.

After leading the Giants to their second Super Bowl win in five seasons, Parcells stepped down (citing health concerns) during the 1991 offseason. Parcells returned to the sidelines less than two years later, as he became the head coach of a Patriots‘ franchise that, to that point, had never won a home playoff game. In four years in New England, Parcells twice led the Patriots to the postseason that included the franchise’s second-ever trip to the Super Bowl, where they fell to the favored Packers in Super Bowl XXXI.

Following the Patriots’ Super Bowl loss, Parcells went back to New York to coach a Jets team that won just one game the previous season. After leading New York to a 9-7 record in 1997, Parcells led the Jets to a 12-4 record in 1998 as well as a run to the AFC Championship Game. Parcells coached one more year in New York before going to Dallas in 2003. In his first season with the Cowboys, Parcells led Dallas to 10 regular season wins, five fewer wins than the Cowboys had collected from 2000-02. Parcells, who was inducted into the Pro Football Hall of Fame in 2013, left coaching for good after the Cowboys fell to the Seahawks in the wild-card round of the 2006 playoffs.

After putting together a Hall of Fame resume in Green Bay, Holmgren, who compiled an 84-42 record with two NFC titles and a Super Bowl victory during his time with the Packers, went to Seattle following Green Bay’s dramatic loss to the 49ers in the wild-card round of the 1998 playoffs. In 10 seasons with the Seahawks, Holmgren’s team won 90 games while making five straight trips to the playoffs from 2003-07. His 2005 Seahawks went 13-3 while becoming the first team in franchise history to advance to the Super Bowl, falling short against the Steelers in Super Bowl XL.

Johnson is credited for helping orchestrate one of the greatest — and fastest — turnarounds in NFL history during his five years in Dallas, as the Cowboys went from a 1-15 team in Johnson’s first season to back-to-back Super Bowl champions by the time Johnson left during the 1994 offseason. While he did not enjoy the same type of success with the Dolphins, Johnson remains Miami’s most successful coach during the post Don Shula era. After an 8-8 season during his first year in Miami, Johnson led the Dolphins to three straight trips to the playoffs that included wild-card round wins in 1998 and in 1999. Johnson and Hall of Fame quarterback Dan Marino retired after the Dolphins were blasted by the Jaguars in the ’99 playoffs by a score of 62-7.

Arguably the greatest coach in NFL history, Lombardi took over as the Redskins‘ head coach in 1969, two years after leading the Packers to their second Super Bowl win and fifth world title over a seven-year span. Lombardi, who became Washington’s general manager in 1968, also served as the team’s vice president of operations during his only season as the team’s head coach. After leading the Redskins to a 7-5-2 record, the franchise’s first winning season since 1955, Lombardi stepped down from coaching for good while maintaining his front office position for the 1970 season. Lombardi, who passed away during the ensuing offseason, left a lasting impact on the Redskins’ organization, as Washington would make the playoffs in 1971 before advancing to its first Super Bowl in 1972.

Shanahan, after becoming the fifth head coach to win back-to-back Super Bowl titles when he did it with the Broncos in the late ’90s, became the Redskins’ head coach in 2010, one year after being fired by the Broncos after a third straight non-playoff season. After winning just 11 games in his first two seasons in D.C., Shanahan’s Redskins won 10 games and the NFC East division title in 2012. The beginning of the end for Shanahan in Washington took place in that year’s wild-card round, as rookie sensation Robert Griffin III, who had entered the game with questions regarding his health, re-injured his knee late in the Redskins’ loss to the Seahawks and has never been quite the same player since. Shanahan was fired after Washington stumbled to a 3-13 record the following season.

The first coach in history to win the Super Bowl during his first season as an NFL head coach, McCafferty guided the Baltimore Colts to a win over the Cowboys in Super Bowl V but was fired less than two years later after refusing to bench legendary quarterback Johnny Unitas. McCafferty quickly resurfaced in Detroit, guiding the Lions to a 6-7-1 record in 1973 before dying of a heart attack during the ensuing offseason.

The jury is still very much out on Gruden, who is just two years into a decade-long contract with the Raiders, who will begin a new chapter in Las Vegas starting in 2020. But after a rocky 2018 season, Gruden and the Raiders showed signs of promise in 2019, going 7-9 after a 6-4 start.

The defensive mind behind three of the 49ers’ Super Bowl wins during the 1980s, Seifert was promoted to head coach following Bill Walsh’s retirement following San Francisco’s win over the Bengals in Super Bowl XXIII. Sefiert proceeded to help lead the 49ers to another Super Bowl the following season before winning another Super Bowl at the end of the 1994 season. Two years later, he left the 49ers as the team’s second consecutive loss to the Packers in the NFC playoffs before becoming the Panthers‘ head coach in 1999.

After two respectable seasons in Carolina (the Panthers went 8-8 in ’99 and 7-9 in 2000), Sefiert’s team bottomed out in 2001, winning just one game before he was fired one day after the season came to an end. He remains the only Panthers coach in franchise history to have never posted a winning season or coach in a playoff game.

“Da Coach” of the fabled 1985 Chicago Bears, Ditka was unable to bring his Windy City success to the Big Easy. After compiling a 112-68 record in 11 seasons in Chicago, Ditka went just 15-33 in three seasons with the Saints before being fired after the 1999 season. Ditka’s tenure in New Orleans is mostly remembered for him trading each of the Saints’ draft picks in 1999 (as well as their first pick in the 2000 draft) to select Heisman Trophy winning Ricky Williams with the first overall pick.

Flores, one of just 13 coaches with at least two Super Bowl victories, would likely be in the Hall of Fame if not for his unsuccessful tenure with the Seahawks after nine mostly successful years with the Oakland/Los Angeles Raiders. After going 91-56 with the Raiders, Flores’ Seahawks compiled a 14-34 record from 1992-94. Flores never returned to coaching after being fired after the ’94 season.

After putting together a Hall of Fame career with the Chiefs, Stram, who guided Kansas City to two AFL titles and a victory in Super Bowl IV, was unable to duplicate that success with the Saints, his second NFL head coaching stop. In two seasons in New Orleans, Stram’s teams compiled a 7-21 record that was largely due to the health of quarterback Archie Manning, who missed all of the 1976 season and part of the ’77 season with an elbow injury. While his time in New Orleans did include a win in Arrowhead Stadium against the Chiefs, it also included an historic loss to the Buccaneers, an expansion team that lost their first 26 games before defeating the Saints in 1977.