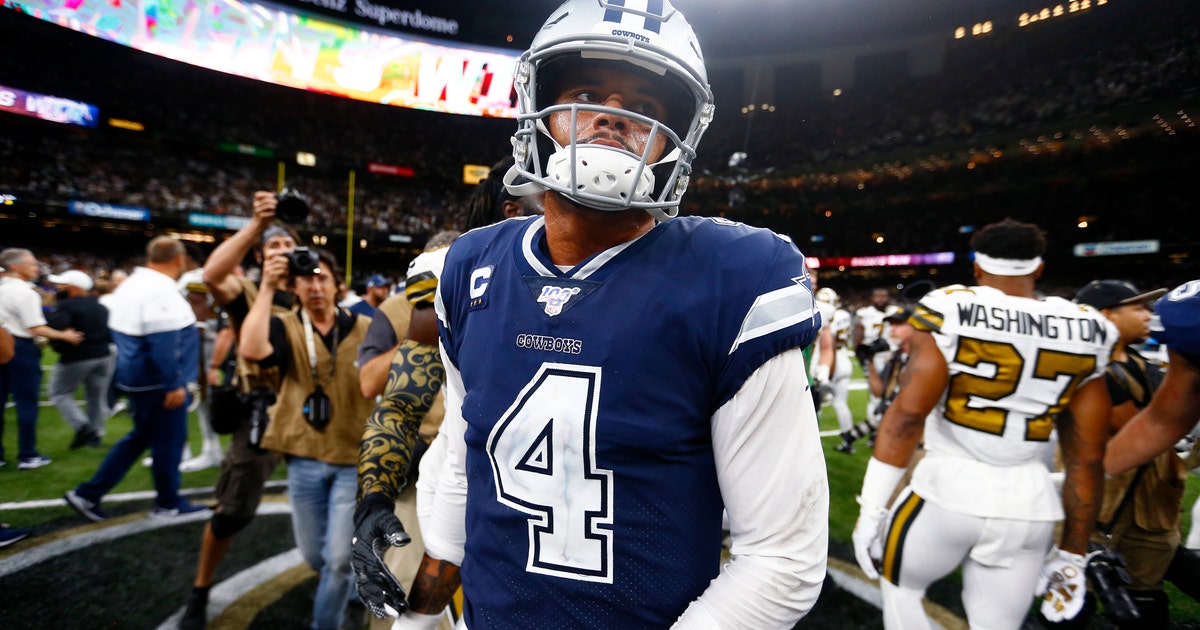 NEW ORLEANS (AP) — Dallas’ dominance of overmatched opponents in its opening three games didn’t seem to prepare the Cowboys well for a prime time road matchup with an NFC contender.

New Orleans limited running back Ezekiel Elliot to 35 yards on 18 carries, quarterback Dak Prescott failed to connect on big plays and the Cowboys made too many costly mistakes, losing 12-10 to New Orleans despite holding the Saints without a touchdown.

“They’ve got a good front and that’s a good defense, but we simply didn’t execute,” Prescott said. “We just continued to step on our own feet and hurt ourselves.”

The Cowboys had scored at least 31 points in wins against the New York Giants, Washington and Miami, teams with a combined record of 2-10.

Against the Saints, who improved to 3-1, they barely reached double digits.

Prescott blamed himself for a pair of bookend errors. Scrambling to his left in the first quarter, he led receiver Randall Cobb too far on a third-down throw after Cobb broke free in the back of the end zone. The Cowboys settled for a field goal.

“I have to make that pass,” Prescott said. “We just left a lot of plays out there tonight, and it showed.”

When Dallas got the ball at its 14-yard line with 1:39 left in the game and zero timeouts left, Prescott was sacked on the opening play, costing the Cowboys too much time.

“That was a terrible decision taking that sack,” he said. “That’s rule one on two-minute drives, especially without a timeout.”

The Cowboys also coughed up the ball on back-to-back possessions in the first half.

Tight end Jason Witten lost a fumble when he was stripped by linebacker A.J. Klein near midfield after catching a pass over the middle.

“That was a terrible turnover on my part,” Witten said. “It’s a basic, fundamental play. Line one for playing tight end is catching the ball over the middle and securing the catch. You have to be able to protect the ball. When you have one like that, it’s hard to overcome.”

Elliot then fumbled on a fourth-and-1 run from the Dallas 43, leading to a New Orleans field goal on the last play of the half.

Elliot’s 1.9 average per carry was the second-lowest of his career, beating only the 0.9 he managed on eight rushes against Denver in 2017.

“It was a tag-team deal,” center Travis Frederick said. “On one play one person had something wrong and everybody else was good and the next play somebody else took a turn making a mistake.”

Prescott remained perfect for the year in the third quarter, going 6 of 6 on the Cowboys’ lone touchdown drive to extend his mark to 28 of 28 for 457 yards and three touchdowns though four games.

But the passing game sputtered the rest of the night. Amari Cooper had five catches, but his longest gain was 14 yards.

“They were giving us some different looks,” Witten said. “They were rolling some coverages to Amari and forcing us to throw it underneath and we weren’t able to sustain our running game enough.”

Six years after giving up an NFL-record 40 first downs to Drew Brees and the Saints in the Superdome, the Cowboys came up empty in a completely different way. With Brees watching from the sideline with an injured thumb, the offense could not produce the 13 points it needed.

“There’s no confidence loss, I’ll tell you that,” Prescott said. “There’s a lot of things we’ll take from this, learn from it and become a better team because of it.”