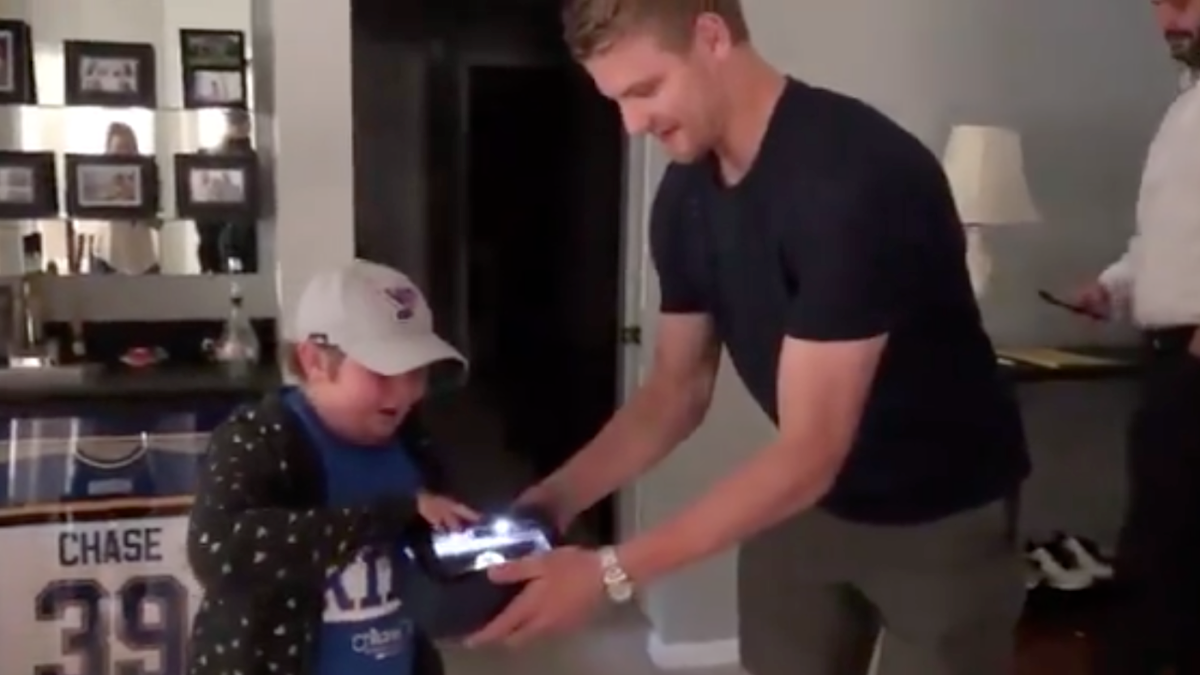 The St. Louis Blues are getting ready to close the book on their championship offseason and kick off their first title defense this week, but they’re still writing some glorious chapters in the final hours.

On Monday, the Blues received their Stanley Cup rings in a private ceremony. The rings are pretty spectacular, and not just because they each carry 10.6 carats in precious weight. Their championship bling brings some very cool features, including homage to Laura Branigan’s “Gloria” (the Blues’ adopted victory song) and Laila Anderson, the super fan that inspired the team on their incredible run last season.

But not only did Laila receive a nod on the Cup rings, she also received one of her own. In a video shared to Twitter on Tuesday, Blues players Alex Steen and Colton Parayko hand-delivered a custom ring to Laila at her home in Missouri. Her reaction upon receiving the surprise gift was just an absolute delight to behold.

The 11-year-old Laila was well known to Blues players long before they hoisted the Stanley Cup last spring, but she became a viral sensation and beloved figurehead of the Blues’ fanbase during the team’s 2019 postseason run. After a period of isolation while battling HLH, a rare auto-immune disease that nearly took her life, Laila received word that she was going to be able to attend a Blues game during the Western Conference Finals, and her emotional reaction warmed the cold collective heart of the internet.

From there, Laila was a fixture at the Blues’ home playoff games the rest of the way. She was a undeniable inspirational force for the Blues and, with the team in need of a win in a do-or-die Game 7 of the Cup Final, she was invited to travel with them to Boston. After they clinched the franchise’s first title, she was on the ice to celebrate right alongside them — even getting a chance to kiss Lord Stanley.

Laila certainly doesn’t need a Stanley Cup ring to forever be associated with the Blues’ first championship; her impact on the club and the bond that they forged during the run likely won’t be forgotten for a long time. That being said, good on the Blues for making sure she got one anyway.