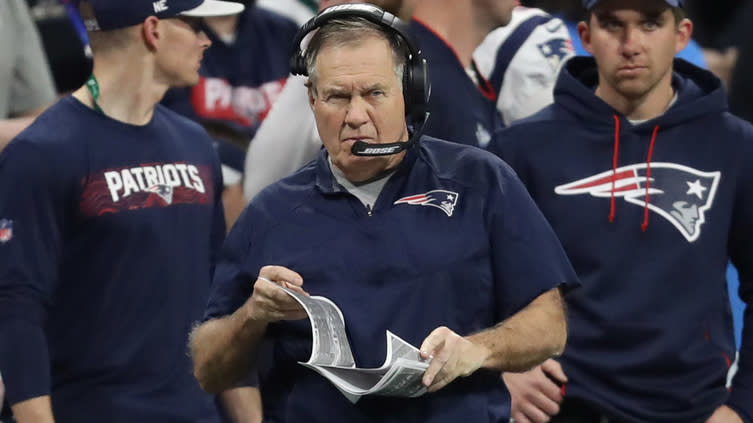 The high-profile agent for a pile of NFL stars including Antonio Brown demurred when approached on the sidelines to talk about Brown Sunday night.

“At this point he’s a free agent and he’s agreed to terms with the Patriots,” Rosenhaus said. “I’ve been asked by Coach Belichick to not comment so that the focus is on the game and that’s what I will do. I have too much respect and have had too good a relationship with the organization to not respect that.”

I asked Rosenhaus how the deal was able to come together so quickly after Brown’s release.

Belichick apparently hadn’t gotten that memo to Rosenhaus to not discuss Brown before the agent went on ESPN this morning.

“Antonio had a robust free-agent market and certainly had a lot of options,” Rosenhaus said on SportsCenter. “But it was hard to compete with New England and that amazing opportunity, that great franchise, and play with one of the all-time greats, Tom Brady, and Bill Belichick.

“The Patriots are obviously a very solid, strong organization,” Rosenhaus said. “They do things the Patriots Way. They expect everyone to be accountable. They don’t make any exceptions. I’ve discussed this with Antonio. And he wants to be a Patriot. He’s prepared to go there, fit in, work hard, be like every other player on the team, do what’s asked of him, do his job and make it work. He’s honored with the opportunity and he’s looking forward to taking advantage of it.”

New England is oozing optimism in anticipation of Brown’s arrival. Meanwhile, media who worked with Brown expressed doubt that it would work here on a variety of fronts from punctuality to on-field precision.

“He’s incapable of getting places on time,” said Mark Kaboly of The Athletic. “It’s not that he chooses to, he’s incapable. Hospital visits, he’d be two hours late. His own radio show. Things he was being paid for. Unless there is someone who is going to be with him at all times, he’s going to be late.”

Kaboly mentioned he’d heard that Tom Brady offered for Brown to stay with him until he got settled.

“He’s going to need to have room for his cook, his social media guy, his trainer and his kids,” laughed Kaboly.

Two aspects to Brown which Kaboly predicted won’t fly in New England? Freelancing routes and being happy in defeat if he’d played well, irritated in victory if his numbers were down.

“You know why Ben (Roethlisberger) was always pumping before he got rid of the ball?” asked Kaboly. “He was trying to figure out what AB was doing.”

Click here to download the new MyTeams App by NBC Sports! Receive comprehensive coverage of your teams and stream the Celtics easily on your device.