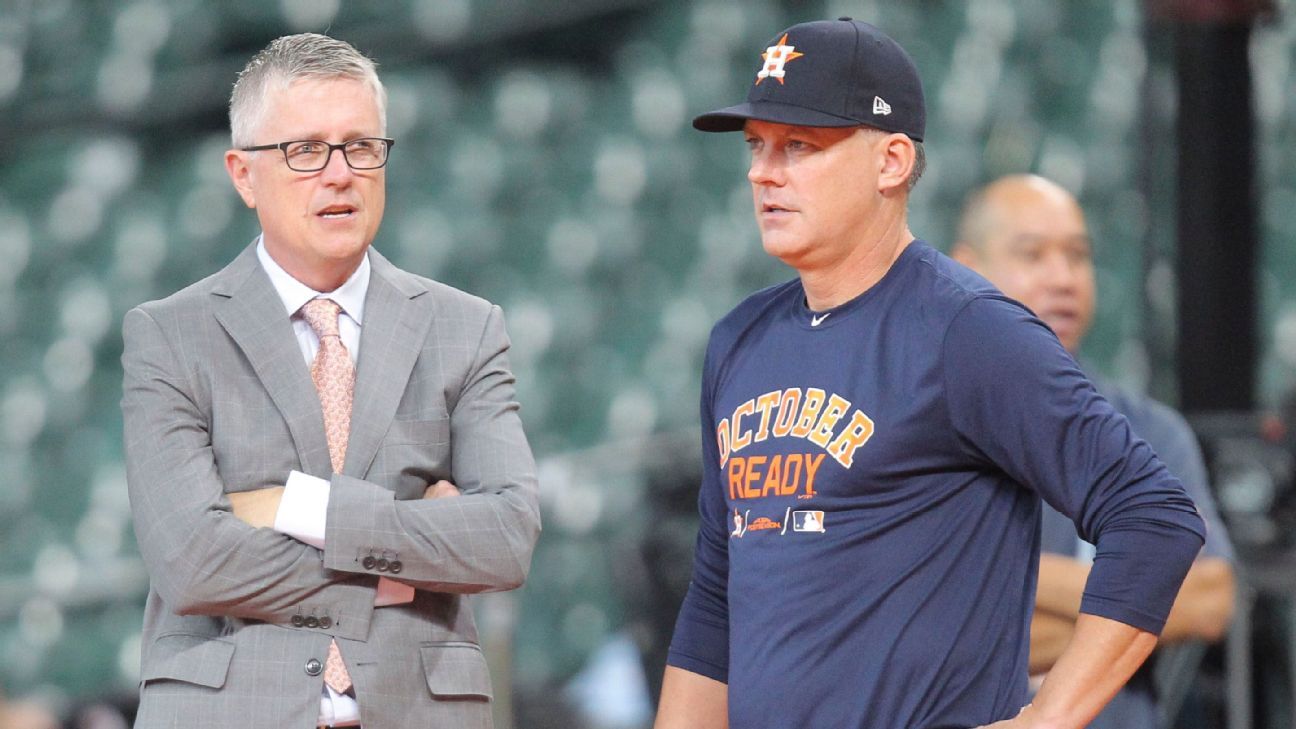 A league investigation confirmed the Astros had cheated by using a camera-based sign-stealing system during the regular season and playoffs of their World Series-winning 2017 season.

Luhnow and Hinch were suspended for the 2020 season, but Crane said the team wanted to go beyond that ruling.

“We need to move forward with a clean slate,” he said.

As part of the league’s penalty, the Astros will also lose first- and second-round draft picks in 2020 and 2021, and the organization was fined a record $5 million. MLB said in its statement that if Luhnow or Hinch “engage in any future material violations” of MLB rules, they will be placed on the league’s permanently ineligible list.

Boston Red Sox manager Alex Cora, who was implicated in the schemes, was not disciplined but is expected to receive a similarly harsh penalty upon the completion of an investigation into illicit use of a video replay room by the 2018 Red Sox. Cora was the Astros’ bench coach during the 2017 season.

While the scheme to steal signs and relay them to batters by banging on a garbage can was “player-driven,” MLB commissioner Rob Manfred wrote in a nine-page summary of the investigation, no players were disciplined — including New York Mets manager Carlos Beltran, who played for the 2017 Astros and was implicated by Manfred as one of the players involved in decoding signs.

Crane also said that players will not be disciplined. MLB’s investigation found that was unaware of the sign-stealing activities by his team.

The league discipline is among the harshest ever delivered by a commissioner, with Luhnow and Hinch banned until the day after the final game of the 2020 World Series despite neither having involvement with the scheme — and Hinch twice trying to damage the monitor used as a show of protest. Manfred nevertheless held the two responsible, pointing to a Sept. 15, 2017 memo regarding the Red Sox’s illicit use of an Apple Watch that promised severe discipline for teams that run afoul of MLB’s rules against using technology during games.

The scheme itself, Manfred wrote, began in 2017 and evolved throughout the course of the season. After initially using video-replay personnel to decode the opposing catcher’s signs via a center-field camera and relaying the information to the bench via phone or text message, Cora “arranged for a video room technician to install a monitor displaying the center field camera feed immediately outside of the Astros’ dugout,” according to the report. Players watched the camera live and, upon decoding the sign, hit the trash can with a bat — and sometimes a Theragun — to signal to the hitter which pitch was coming. Initially, they had tried clapping, whistling or yelling, Manfred wrote, but players determined the trash can was the best use of relaying the sign.

While the banging scheme was discontinued before the 2018 season, Manfred wrote, “the Astros’ replay review room staff continued, at least for part of the 2018 season, to decode signs using the live center field camera feed, and to transmit the signs to the dugout through in-person communication.” That practice ended during the 2018 season when players believed it was no longer effective.

The investigation found no use of illicit technology during the 2019 season.

No World Series odds changed as a result of the Astros’ punishment at Caesars Sportsbook, as no players were suspended.

Houston remains tied for second-best odds at 6-1 with the Los Angeles Dodgers. The New York Yankees are favorites at 4-1.