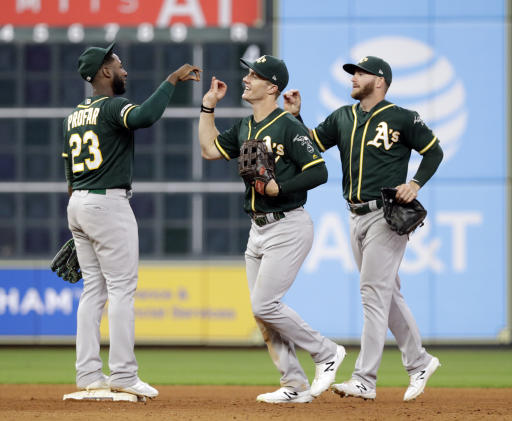 HOUSTON (AP) — Matt Olson and Sean Murphy both homered twice, and the Oakland Athletics tagged Wade Miley for seven runs in the first inning and scored a season high in a 21-7 rout of the Houston Astros on Tuesday night.

After being blanked in a lopsided loss on Monday, Oakland recovered to win its seventh of nine and remained ahead of Cleveland for the second AL wild-card spot.

The Astros were coming off a 21-1 win over Seattle on Sunday and a 15-0 thrashing of Oakland on Monday in which they hit seven homers.

But on Tuesday, the A’s had a season-best 25 hits and built a 7-0 lead in the first inning without an extra-base knock. They still ended up tying a season high with six homers after not hitting any in their previous two games.

Khris Davis hit Oakland’s first long ball in the second inning. Olson went deep in the third and added another homer in a six-run fourth that also featured blasts by Sean Murphy and Marcus Semien to push the lead to 17-2. The A’s set a franchise record for runs scored through the first four innings.

Murphy homered again in the fifth, and Semien added an RBI double.

All nine Oakland starters had at least two hits, and six players finished with three each. Olson and Murphy had three hits and four RBIs apiece and Davis and Semien drove in three runs each.

Olson has a career-high 31 homers this season, joining Mark McGwire (eight times) and Jason Giambi (twice) as the only Oakland third basemen to top 30.

The Astros got two homers each from George Springer and Martin Maldonado to give them a franchise-record 252 this season as their five-game winning streak ended.

After Miley (13-5) had allowed five runs without getting an out in his last start against Seattle, manager AJ Hinch was asked before the game what he’d like to see from his left-hander this time.

”I want him to get an out,” Hinch joked.

Hinch certainly wasn’t laughing when one out was all Miley managed before he was pulled with the Athletics leading 6-0. Miley allowed seven singles and walked one before he was replaced by Cy Sneed. He was charged with seven earned runs, which tied a season worst. The eight hits Oakland piled up in the first inning tied a season high.

Miley took his first loss since June 17. In his previous tough start, Houston rallied to win in 13 innings.

Astros: SS Carlos Correa (sore lower back) is progressing, and if his next two days of rehabilitation go well, he will join Triple-A Round Rock for a rehabilitation game on Friday.

Oakland LHP Brett Anderson (11-9, 4.19 ERA) will pitch Wednesday against a to-be-determined starter for Houston. Anderson allowed eight hits and five runs in five innings of a 10-6 win over the Angels in his last start but did not factor in the decision.